The SaGa Series Dares To Be Different, And That’s Why It’s Special 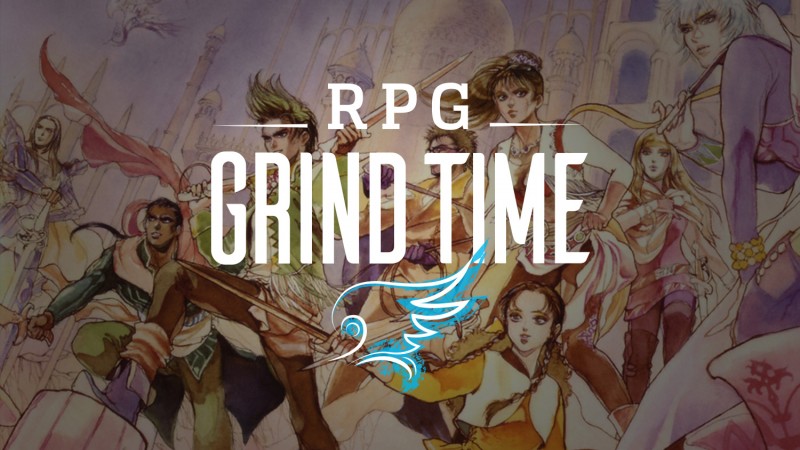 Square Enix’s SaGa series has always marched to the beat of its own drum. The developers aren’t afraid to take risks and be unconventional. With a reputation for non-linear gameplay, player choice, and freedom in exploration, SaGa was ahead of its time, but despite over ten entries and two decades of history, it never really had a heyday in North America. However, Square Enix isn’t giving up and surprised many this past E3 by announcing two previously unreleased games in the series, Romancing SaGa 3 and SaGa Scarlet Grace: Ambitions, would finally reach our shores. Today marks Romancing SaGa 3’s first time available in North America – 24 years after its initial release in Japan. To celebrate and see what’s ahead, I chatted with general director Akitoshi Kawazu and producer Masanori Ichikawa about the series and what we can expect from these games. Both were candid about the state of RPGs and why it took some time to get the franchise back off the ground. 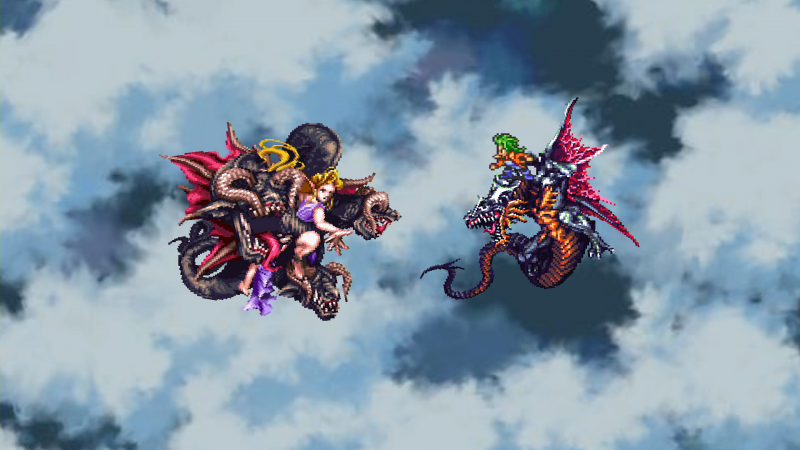 On Bringing The Series Back…

Ever since the PS2 era, the SaGa series has been pretty quiet, with some Japan-only browser and mobile games to its name. Scarlet Grace marks the first mainline entry we’ve had in a decade, and the Romancing SaGa remasters have certainly helped the franchise reach more people. As for the delay between main entries, it’s a bit complicated but comes down to challenges with publishers trying to adapt to a changing market. “As we came into the 2000s, the Japanese gaming market stagnated considerably,” Kawazu said, citing the boom in mobile gaming and Japanese companies trying to target a Western audience. “For a long time, in the Western market, the only things that really did very well were games with high specs. But we’ve entered an era in which, pixel games and 2D-games have become popular again, traditional games have become popular again. With that happening, we decided that it would be a good time to bring the SaGa series back into the Western market.”

While Square Enix’s focus has been on its flagship series (Final Fantasy, Kingdom Hearts, and Dragon Quest), it has been slowly re-releasing older titles and putting smaller properties in the spotlight. It even established a new studio, Tokyo RPG Factory, to produce new RPGs in a classic style inspired by the ‘90s. Around this time, Kawazu noticed more and more fans coming out of the woodwork, saying they had been waiting for more from SaGa. This demand has allowed the series to come back and grow its fan base. “Within the past few years, the SaGa series has started to be seen again as the great series it is and [regain popularity],” Kawazu notes. 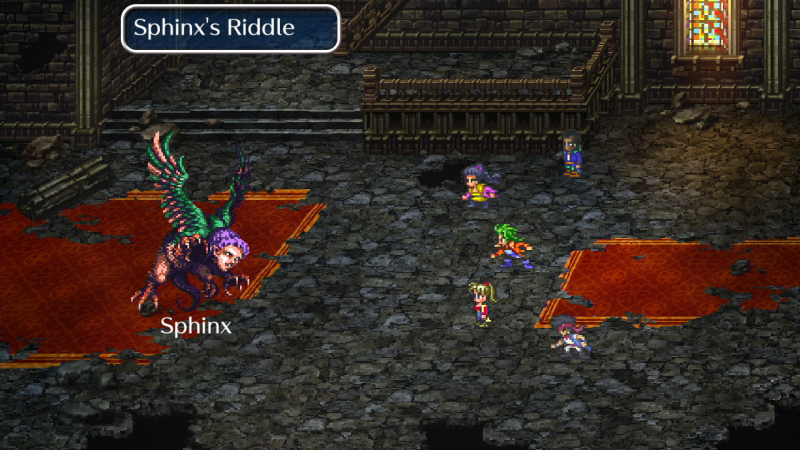 On Romancing SaGa 3’s Legacy And The Remaster…

Romancing SaGa 3 first came out back in 1995, but this is the first time it’s headed out West. The game carries on the tradition of its predecessors by having multiple protagonists and allowing your actions in battle to determine how characters grow. For instance, if you cast a lot of spells with a particular combatant, their magical stats will increase. This even extends to the weapons: if your character uses a specific weapon type then that character learns special attacks for it. For the HD remaster, fresh content and enhancements were made to improve the experience, such as optimized graphics and new storylines. “[It] involves going through the game and bringing out its initial potential to a fuller level, and sometimes adding additional elements to make it easier to play,” Ichikawa says. “Just a very simple example, we’ve added an autosave feature so the number of saves that you can make increases drastically. We’ve also added a feature that allows you to tell how far through the game you are, you have sort of a travel journal that you can look back on. Of course, there are also additional dungeons and events. And we’ve also added a New Game+.” To experience this lost chapter in the West, the remaster is now available digitally on PS4, Xbox One, Switch, Vita(!), PC, and iOS. 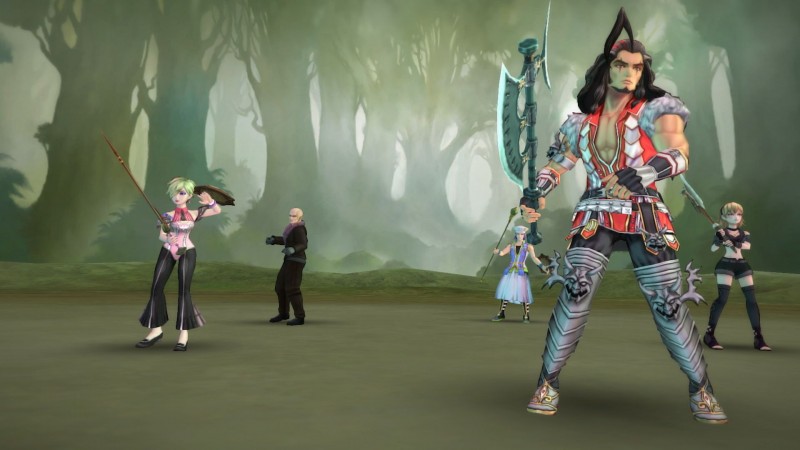 On Making A Modern SaGa Game…

Scarlet Grace is a new chapter, hitting a new generation of players. Do you keep the classic elements? Reinvent the wheel for a modern audience? How do you please longtime fans versus drawing in newer ones? For a series known for its experimentation, it’s easy to wonder how designers approach a new entry. For Kawazu, it’s about going back to the basics. “Gamers are gamers from start to finish in any era, and I really don’t think that the sorts of things that appeal to people who are playing games are, at a fundamental level, very different from era to era,” he says. “However, when it came time to make SaGa Scarlet Grace, we definitely took a step back and thought, ‘Okay, what are the fundamental elements of an RPG? And how do we achieve those in the modern era?’”

Kawazu said his main goal was for players to go through the story with the characters and have the same feelings and experiences. Since this was so important, he decided not to have dungeons in the game, which allowed the team to add more events and story-driven content. “I definitely went in thinking we needed to cut away all the chaff,” he says. “I didn’t want level design. There are no dungeons because there are a million action games out there where you can crawl through dungeons. If you want to do that you can go play one of those games, you don’t need to play this game to get that.”

Kawazu expanded on this, saying he didn’t want the player aimlessly wander around somewhere to look for treasure or enemies to fight. “I really didn’t think that was necessary because all that is, is you’re just kind of lost for a while. You’re making the player play just to make them play a little bit longer, and it’s kind of pointless,” he explains. In Scarlet Grace, you still fight bosses and search for things, but they all have story elements attached to them. “I wanted players to have to think about what they were doing and have to actually engage with this story,” Kawazu says.

This also extends to the main plot. This isn’t a save-the-world RPG: there is no hero or a great evil to take on. “[The] different characters are going out into the world for their own reasons, to better themselves and to further their own personal stories,” Kawazu explains. All characters have their own feelings and strong backstories, but you also may view them differently based on the choices you make. “In this game, while there are basic concepts of the characters, the player’s involvement in those characters choices largely makes up who the characters become.” As for how those choices turn out, this isn’t about having a more ideal version than the other. “We do our best to make sure that there are no objectively right answers,” Kawazu says. “There isn’t a right or wrong [one], it’s ‘this person thinks this way, so they chose A,’ and ‘this person has these values, so they chose B,’ and the natural results from those choices will then follow.”

As you can see, the SaGa series continues to march to the beat of its own drum, and that’s part of what makes it so important in the RPG sphere. Innovation and change don’t happen by standing still. The series takes risks, and some don’t always pan out (cough, cough Unlimited SaGa), but you can’t deny the influence SaGa has had on RPGs, especially when it comes to choice and branching paths. “The SaGa series is a series that’s constantly challenging what it is to be an RPG,” Ichikawa says. “Yeah, Romancing SaGa 3 is an old game, but I really hope players get a chance to take a look at it and look at how back in the day we tried to challenge these preconceptions, and also play Scarlet Grace and see how we continue to challenge these preconceptions. I think we’re breaking the mold in different ways than Dragon Quest, Final Fantasy, or Kingdom Hearts, so I think it’d be very interesting for players to have a look at that.”

Romancing SaGa 3 is now available, and Scarlet Grace hits on December 3. For more on the SaGa series, you can read our other interview from E3.

Looking Back At Zelda: Link’s Awakening With Its Director Takashi Tezuka