The Angry Birds Movie 2 Is Not Actively Horrible

The original Angry Birds Movie was a hit. It featured a cast full of SNL alumni and other famous comedians and it grossed an estimated $350 million worldwide. I thought it was, surprisingly, pretty solid and featured a story that ended conclusively with satisfying growth for its protagonists. It certainly didn’t demand a sequel, but here we are. Much like the previous film, most of its cast spent (or are currently spending time) on SNL, along with a collection of other talented comedians. The sequel is also, similarly, pretty solid. The Angry Birds Movie 2 is not a great film, serving mostly as a visual gag and joke machine, but if “solid” is what we can expect from video game movie adaptations in the future, then I consider that a step in the right direction.

The movie begins with Bird Island’s Red (Jason Sudeikis) and pals Chuck and Bomb (Josh Gad and Danny McBride) living as famous heroes continuing their war with Piggy Island and its leader, Leonard (Bill Hader). The war has evolved into harmless pranks, but a new threat appears when a third island, Eagle Island, starts launching giant meteoric balls of ice at the other two islands in an effort to take them over. The birds and the pigs decide to form a cooperative team to combat the new threat, and things move on from there. 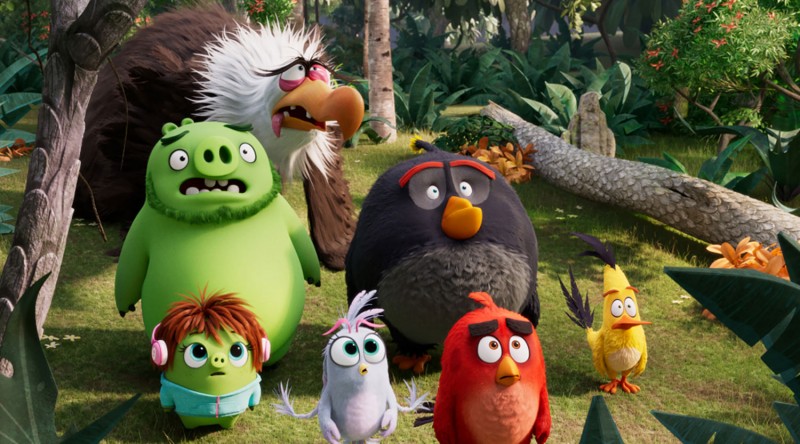 The film’s visuals and animation are great. The detail in the environments and characters are impressive, especially when Chuck gets to show off his high-speed antics, or the ice meteors land with impressive explosions. I also like how the birds use slingshots to transport themselves around the island. It looks cool, and I liked how it was treated as a normal public transportation option. The cast is also funny, even though not every joke lands. Leslie Jones’ Zeta is great and makes me wonder why she doesn’t do more voice work. Zach Woods also has a small part as an eagle security guard that stood out despite only being a few lines.

The film definitely trades purposeful plotting and clever writing for visual gags, and for the most part it works pretty well. Eagle Island is covered in ice, and its leader, Zeta, tries her best to treat it like a tropical paradise, lounging in a frozen pool or trying to take a shower with ice shards. She also has a chihuahua dog frozen in a block of ice that she keeps trying to feed, but he can’t eat because he’s in a block of ice. It’s incredibly stupid, but it made me laugh, which is how a lot of the gags function in the movie.

One moment seen in the trailer tasks the team to work together to control an eagle costume that leads to some very bizarre, but entertaining animation that culminates in a bathroom sequence that I am embarrassed to admit made me laugh out loud. A dance contest also happens for no real reason other than to creates an opportunity for some fun animation.

A plot certainly exists, but I questioned why various things were happening. Red and his friends are local celebrities, but I couldn’t tell if Chuck’s sister, Silver (Rachel Bloom), knew who Red was despite billboards of him all over the island. I also never quite understood why launching ice meteors at neighboring islands would mean the Eagles could eventually go live there, but hey – that chihuahua in an ice block sure is weird! 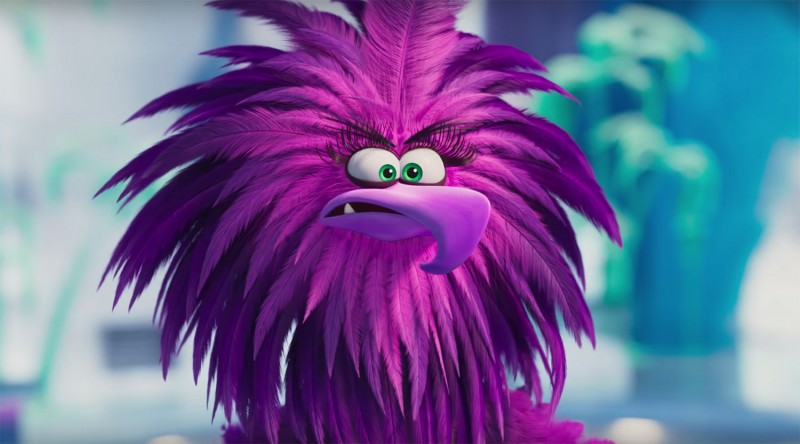 Attempts are made to show Red being unsure about his future as a hero, but being worried about not being a famous person with lots of friends isn’t a particularly compelling conflict. I was thankful to see the film dodge the familiar trope (especially in children’s animated films) of awarding all the credit of victory to the protagonist, despite the credit truly belonging to the team and the brilliant engineer who orchestrated and executed the ultimately, successful plan.

The sequel lacks the legitimate danger of the first film (the pigs stole the birds’ children!), but the jokes-per-minute ratio is higher and I liked the new antagonist, Zeta. Angry Birds The Movie 2 is a competent film and it makes me hopeful about the future of video game movie adaptations. It doesn’t break any new ground in animation or do anything particularly noteworthy with its plot, but I laughed often and it looked great.

The Angry Birds Movie 2 releases in theaters August 14. You can read our thoughts on the first film here.