Stranger Things is a well-executed throwback to classic ‘80s nostalgia that follows a group of kids in a small town as they solve world-threatening mysteries and try to grow up at the same time. A 16-bit callback video game is well-suited to tap that same viewership vein. The aesthetic makes the game feel like it should have been released for the Super Nintendo, but the simple action gameplay holds it back from being a worthwhile companion to one of Netflix’s biggest hits.

In Stranger Things 3: The Game (which is confusingly the second Stranger Things game), you control the main cast from an isometric perspective to explore the town of Hawkins, Indiana, and beat up monsters and bad guys as you play through the events of the third season. The story beats are identical to those of the show, but the dialogue is truncated. Playing an adaptation like this is nostalgic in its own right, as direct video game adaptations of popular media are rare these days. I enjoyed that element, but it does nothing to expand the lore, dig deeper into the characters, or show interesting beats happening outside of the main story.

The main missions are hampered by their need to hew close to the source material. They’re all fetch quests, or arbitrary moments where the characters proclaim it’s time to talk to Steve at Scoops Ahoy, or agree they should all meet at Mike’s basement. I felt I was moving around in a circle as I traveled point to point with simple puzzles and enemies serving as hurdles. A handful of sidequests exist, but they tasked me with doing boring things like killing rats in a basement, delivering pizza, or finding hidden gnomes and the payoffs were disappointing.

You play as two characters at all times, swapping between them whenever you want. You unlock additional characters every few missions, and each of the 12 has different abilities. Mike and Hopper are up-close brawlers, for example, while Will is a ranged fighter and Max’s special ability drops healing items. I enjoyed trying different combinations, but also appreciated that you can use whoever you want at any time, even if it doesn’t fit with the story. That freedom extends up to the end boss, when I was forced to use a pair of characters I had learned early weren’t for me.

Despite having different strategic options available with various characters, the moment-to-moment combat is bland. Depending on your attack range, you just press the attack button a bunch and then move to the next enemy. When lots of enemies are on-screen you use your special ability, but that’s about it. I didn’t find blocking useful until the end boss, when it was forced upon me as a necessary mechanic. The geometry of the levels often made it harder to attack enemies than it should have been. I would get stuck on corners or they would be out of reach when they didn’t appear to be.

The upgrade system disappoints, only giving you five upgrade slots shared among the 12 characters. I switched characters often, so I didn’t like equipping upgrades that benefited single characters. I ended up using the ones that granted universal bonuses, like extra health or extra walking speed, which were consequently the most boring ones. You craft the various upgrades by finding items in the environment or buying them from shops and vending machines, but I always seemed to be short on items and money, despite destroying every breakable item in every location.

No online multiplayer options are available, but local co-op exists. Playing with a friend is functional, but it splits the screen as opposed to letting both players control their character on a single screen. The scrunched screen makes it more chaotic, but having the option to play with a friend is always welcome, even if caveats exist.

As someone who enjoys Stranger Things, walking around a pixelated version of Hawkins’ familiar locations with characters from the show is enjoyable. Outside of the sightseeing, however, the game does little else to garner excitement. The combat doesn’t ask much of the player and the mission structure underwhelms. If you want to experience the events of Stranger Things’ third season, you’re better off sticking to the source material. 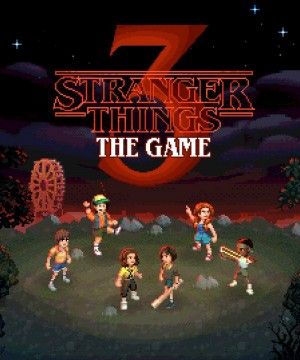 Summary: The combat doesn’t ask much of the player and the mission structure underwhelms. If you want to experience the events of Stranger Things’ third season, you’re better off sticking to the source material.

Concept: Take the plot and characters of the third season of Stranger Things and adapt it into a pixelated, old-school action game

Graphics: The pixel art characters and environments recall the 16-bit era in a fun way, but each character only has a few animations

Sound: Much like the show, the synthwave soundtrack sets the mood well, but the number of tracks is disappointingly small

Playability: The characters move slow (even with upgrades), combat is too simple to be interesting, and lining up attacks can sometimes be needlessly difficult

Entertainment: The video game adaptation of the popular show emulates the ’80s aesthetic well, but the action is boring and the missions rarely push you to do more than move from point A to point B

A Look Inside The Square Enix Cafe In Akihabara