Sparklite Preview — The Culmination of A Dream In The Indie Scene 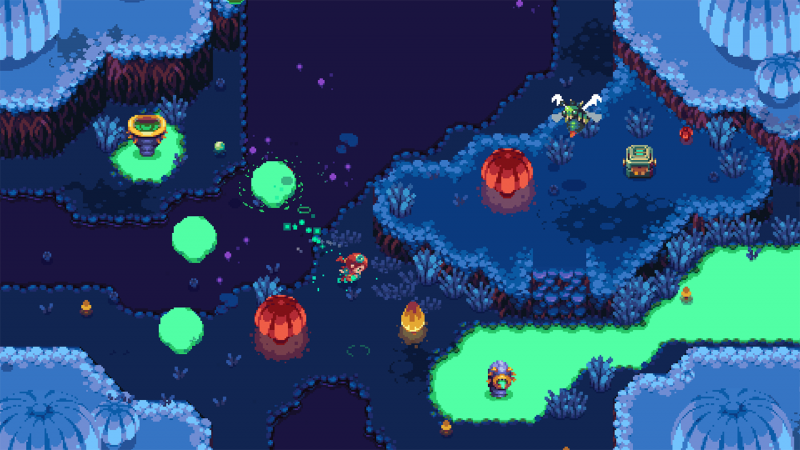 For Red Blue Games co-founders Edward and Lucas Rowe, developing games has always been intertwined with their indescribable bond as twin brothers.

“We would take those spools of paper and get on either end of it and draw until you met in the middle and you have a world,” Edward adds. “We would do battles with stick figures where we’d each draw a picture and you’d fill it in one at a time and sort of fight each other by adding to the drawing.”

Since they were kids, Edward and Lucas have always been making games together, whether it was on spools of paper, using the HyperCard program on a Mac Plus, or creating a Dungeons & Dragons game using little outside of a Lego set and their creativity. Games became a passion that they both knew needed to be a part of their future.

“The running theme of our childhood is just sort of entertaining ourselves by making games for each other,” Lucas says.

Games are what deepened their connection,  but as the pair got older and their programming skills grew, the two put their passion for creating together on hold to pursue careers in programming and families. That was until 2013 when the brothers finally decided it was time to take the plunge and return to their love of making games.

“We reached a point where we were both ready, and I feel like there’s a window in your life when you can do something like this and that window was open,” Lucas says. “We knew it was going to close soon, so we took the chance to do it when we could.”

That brings us to Sparklite, the duo’s first major foray into the indie scene. The adventure game features gorgeous visuals and a unique soundtrack, a relevant story and protagonist, and a gameplay loop that will appeal to anyone familiar with the genre. The Rowe brothers are confident they can make a splash with Sparklite.

Ada And The World Of Sparklite

In Sparklite, players take on the role of a silent protagonist named Ada. This adventurous gadgeteer is reluctantly thrust into a conflict between the people of Geodia and the Baron, the game’s antagonist who’s hellbent on building his mining empire by draining the planet of the resource that powers and connects all life: otherwise known as Sparklite.

“She’s somewhat inspired by Rey and Han Solo put together,” Edward says. “We tried to put character into her animations and things like that to make her a fun, likable character even though she doesn’t speak.”

When creating the characters and story for the game, the Rowes attempted to not bash players over the head with their message of the importance of science in an industrial age.  But they also wanted to include interesting tidbits that flesh out who inspired them in the first place. For instance, Ada is named after the mother of computer programing, Ada Lovelace, and her companion Hopper is named after Grace Hopper, another pioneer of computing.

While the choice to make Ada a gadget-wielding scientist made sense thematically, it also fits with Sparklite’s gameplay.

A Roguelike For All Seasons 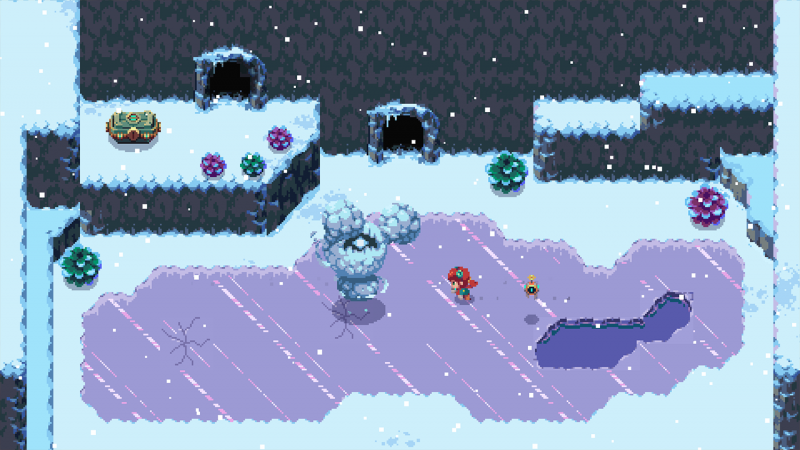 Sparklite is a roguelike for beginners, focusing more on gadget experimentation and exploration than hardcore runs and crippling player deaths. While the game still focuses on a run-based system of starting over each time you die, the mechanics are much more forgiving in that everything collected on that run returns with you to the hub area of The Refuge.

“We are definitely doing our best to cater toward the more E for Everyone than the hardcore roguelike like Binding of Isaac,” Lucas says. “So the depth of the gameplay will come from having more gadgets, not combos or anything like that.”

Gadgets are an integral part of the game and players will need to seek them out on their different runs to advance. Gear such as a shrink ray or a batch of cluster bombs not only make life easier against various enemies, but allows players to find a multitude of secrets hidden throughout Geodia.

The mix of gadgetry and exploration gel in a way that kept me coming back for more during my time with the game. Like any good game in the genre, the more I used the tools at my disposal, the more confident I was exploring each new biome, and most of the time I was rewarded for my bravery.

While Sparklite is inherently focused on being a game for everyone, the Rowe brothers are still striving to add aspects of the game that will make genre fans feel at home, whether it’s through exploration or boss battles or possibly adding a new game plus mode later down the line.

A Song Of GameCubes and Gadgets 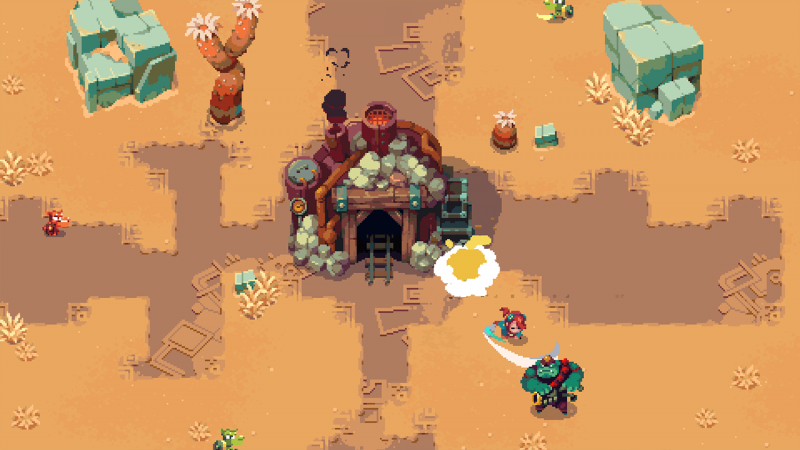 Many indie games over the past few years have found success replicating the 16-bit melodies of yesteryear, but with Sparklite, the Rowe brothers wanted to do something different.

“It was sort of a high-fidelity theme, which was the perfect mood for what the music was, so we looked at it as a mood signpost. It was piratey and adventuresome,” Edward says. “After we had that, we started doing the rest of the music for the game with that guiding it. But then, Dale North (the game’s composer) had the idea to go with this sort of GameCube sound and we were not sure because it was different from the high fidelity one that we loved. So that was a risk but then he came back with a version and we really liked it and we thought it was really in line with the aesthetic of the game which we’ve been calling modern retro.”

During my time with the game, I was constantly pausing the action to listen to the mix of relaxing and exciting themes that underscored my adventure. The music heavily reminded me of games such as Animal Crossing or Super Mario 64 in how they were able to bring out the warmth and charm of Sparklite while also motivating me to progress further in the game.

Modern retro also fits well with the visuals of the game.

Invoking the modern pixel art styles similar to Celeste and Owlboy, the team at Red Blue Games has created an engaging and vibrant world that isn’t beholden to development techniques of the past. Geodia is evocative of the 16-bit era while adding visual flairs that make it work well on today’s systems.

“We’re trying to let ourselves do modern visual techniques like there’s a motion blur when you change rooms and there are some screen effects,” Edward says. “So we sort of try to strike this blend where we’ve taken modern techniques and applied them to make pixel art better, hopefully. It doesn’t have to be a retro thing to be pixel art.”

The road hasn’t always been easy for the Rowe brothers, but whether it’s design challenges or working with family, they’ve never doubted their decision to branch out on their own. With Sparklite’s imminent release, the brothers will finally achieve a dream that all started with a simple roll of paper.

“We’re launching across the world, so there’s going to be someone in Brazil that plays our game and it’s just really cool to think about,” Lucas says. “I’m really glad we did it. There are just no regrets right now, because there’s just no way this could have happened a few years ago.”

Sparklite launches on November 14 for Nintendo Switch, PS4, Xbox One, Mac, and PC.

Sony Signs Deal With Disney Plus And Hulu For Its Movies