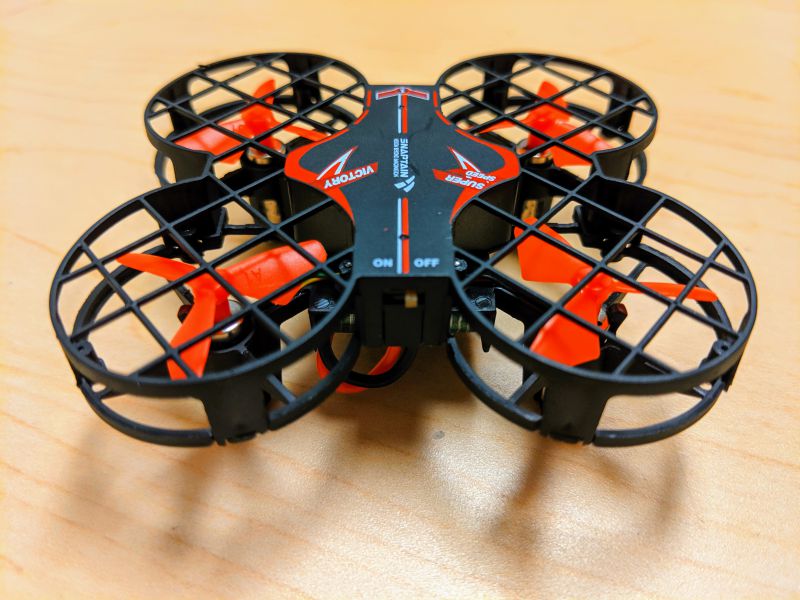 REVIEW – The SNAPTAIN H823H Plus Mini Drone is a fun, inexpensive way to introduce newbies, young and old, to the joy of drone piloting. The SNAPTAIN comes with a number of added features which just a few years ago would only be found on higher-priced drones. Not all of these additional features work as consistently as they should, but at $29.99 for the drone, controller, and a bunch of extra parts, the SNAPTAIN is a great starter drone.

The SNAPTAIN H823H Plus Mini Drone is a small, multi-function drone designed with beginner pilots in mind. As with most drones this size, it’s powered by small rechargeable Lithium Polymer (LiPo) batteries that average around 7-8 minutes of flight time. 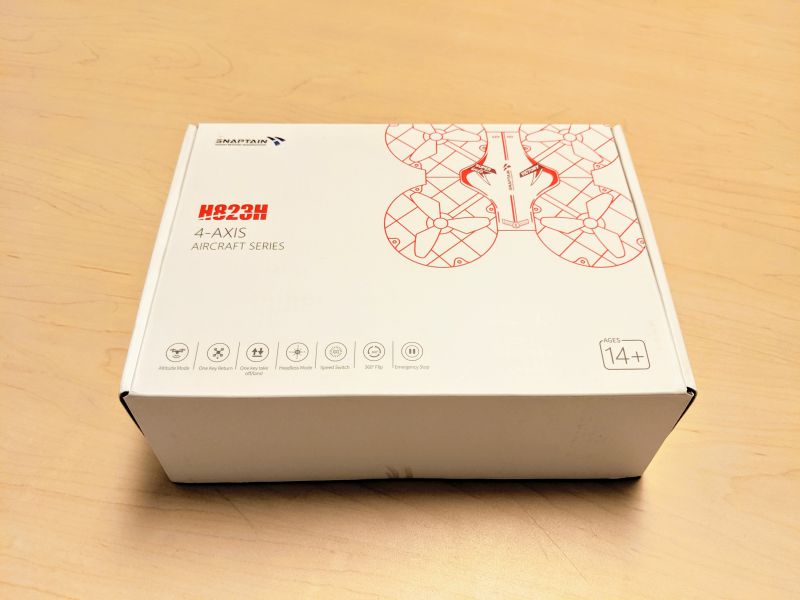 The Drone comes in a nondescript white box. The main functions of the SNAPTAIN are featured on the outside of the box. 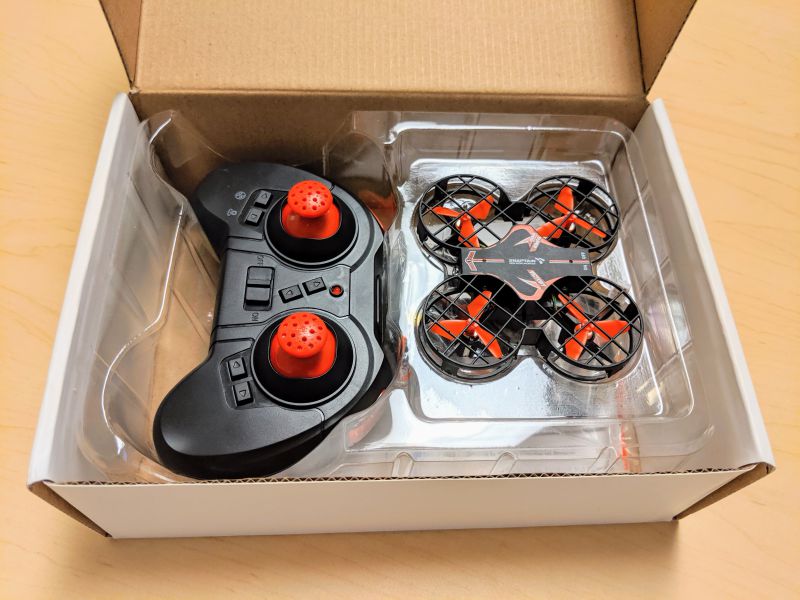 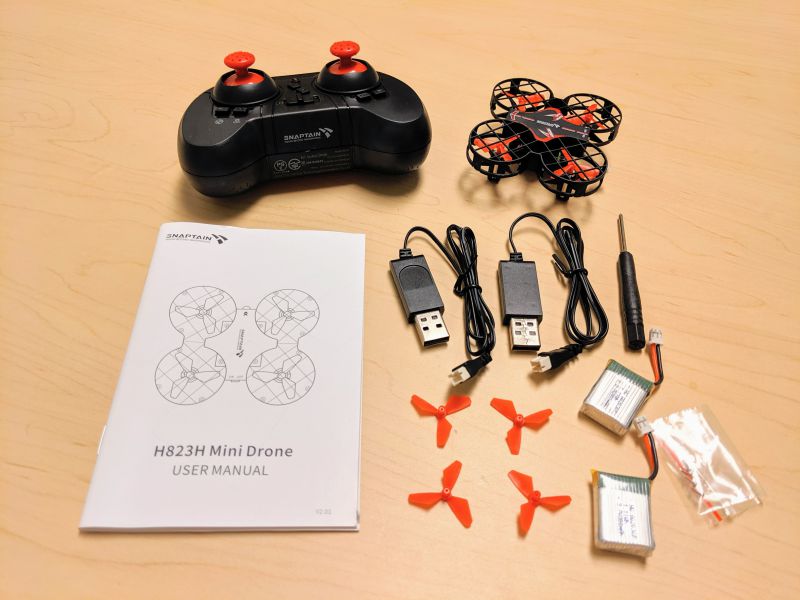 The SNAPTAIN looks like most drones of similar size and price, the main differentiating feature is the built-in propeller cover. 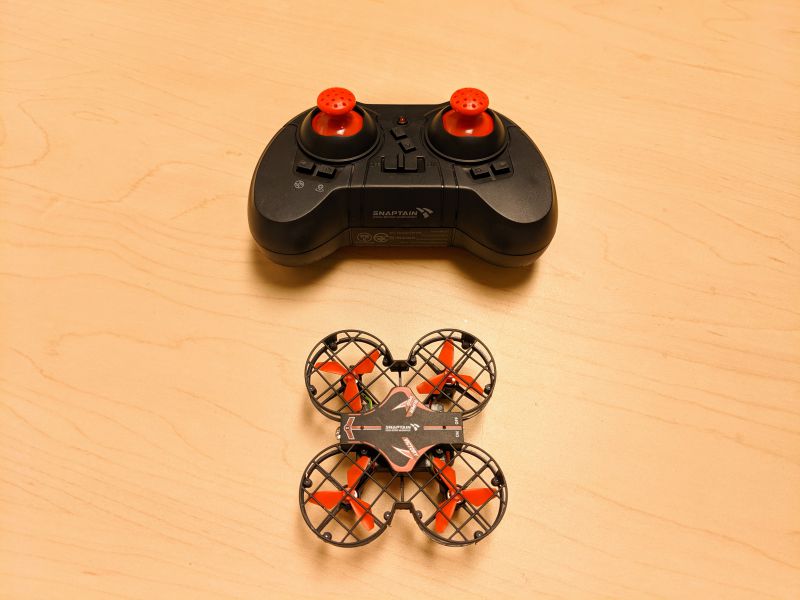 This is a great design addition because usually with smaller drones you’re constantly replacing broken props from the multitude of crashes, but the SNAPTAIN’s cover prevents this. 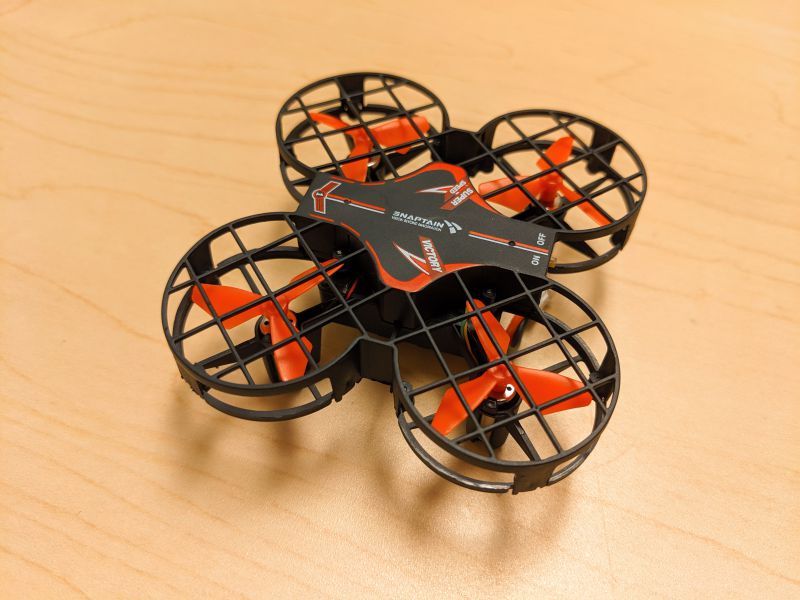 Another great benefit of the cover is that it protects little fingers from getting injured by the drone’s spinning plastic blades. 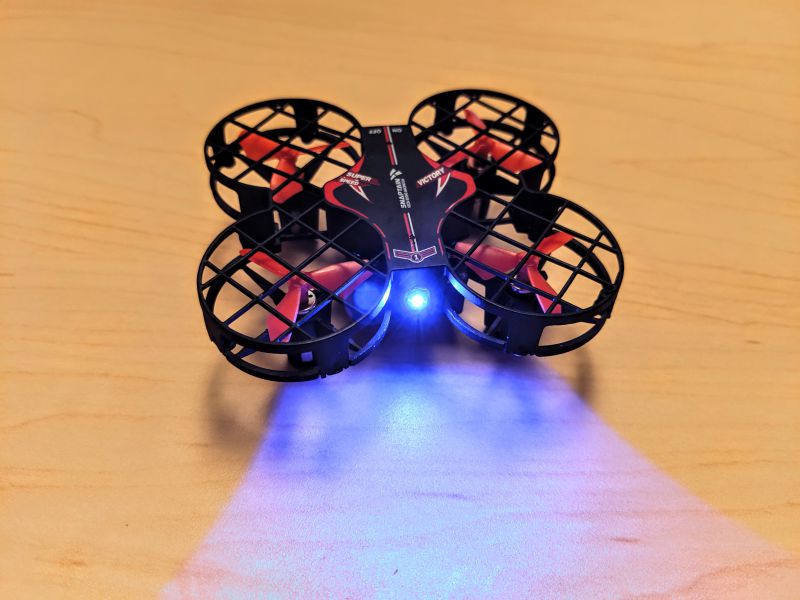 The SNAPTAIN has a blue LED headlight in the front of the unit so pilots can easily orient themselves for flight. 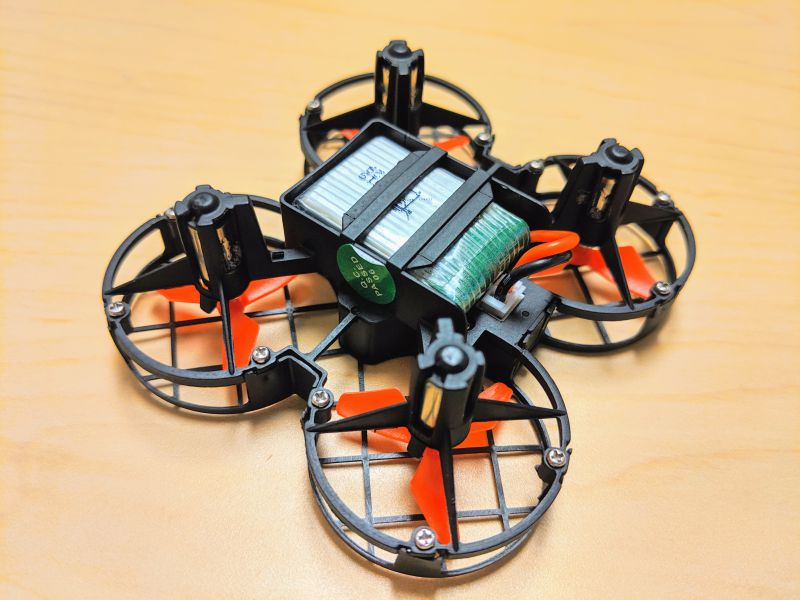 The SNAPTAIN’s LiPo battery sits underneath the unit and is held in place by two brackets and the power plug itself. 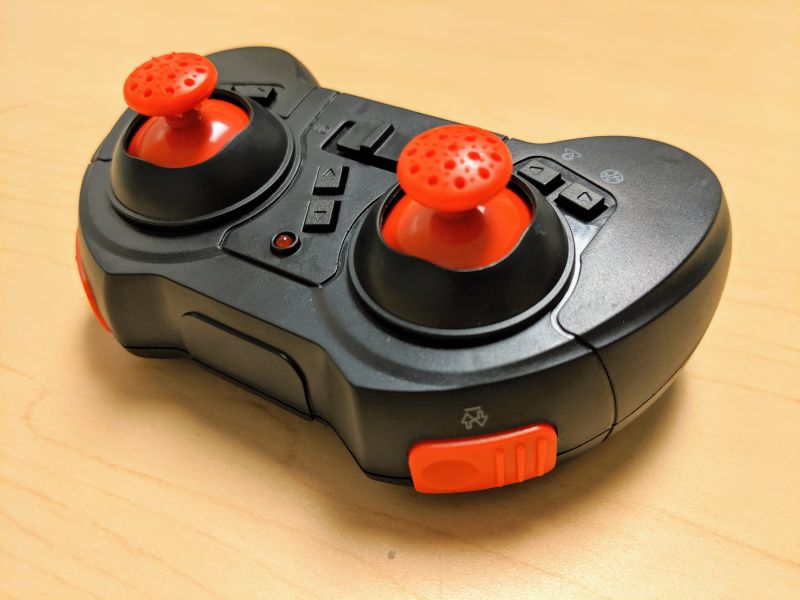 The controller is plastic and mini-sized which is great for tiny hands and was appreciated by my crack team of test pilots. 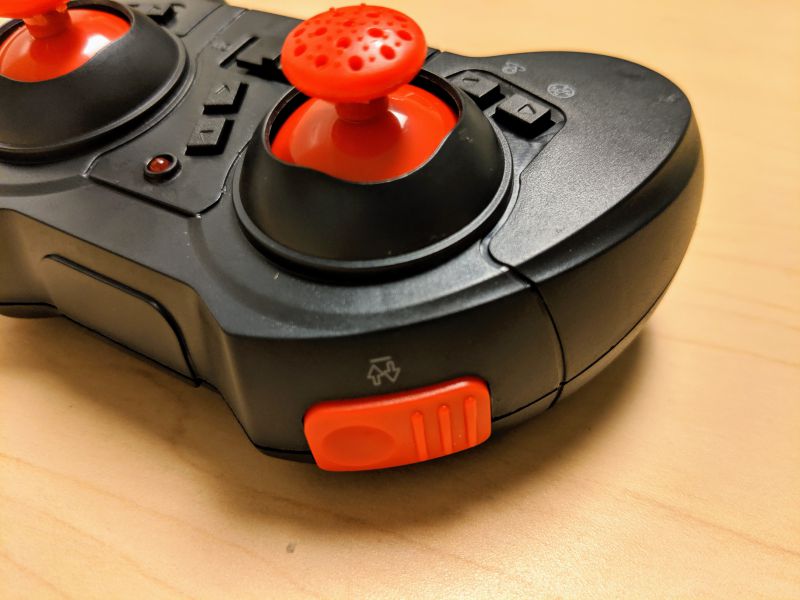 SNAPTAIN manages to get a good number of buttons and controls on to the tiny surface of the controller. There are shoulder buttons for automated functions, buttons to adjust flight trim, clickable flight sticks, and an on/off switch with a LED power indicator. 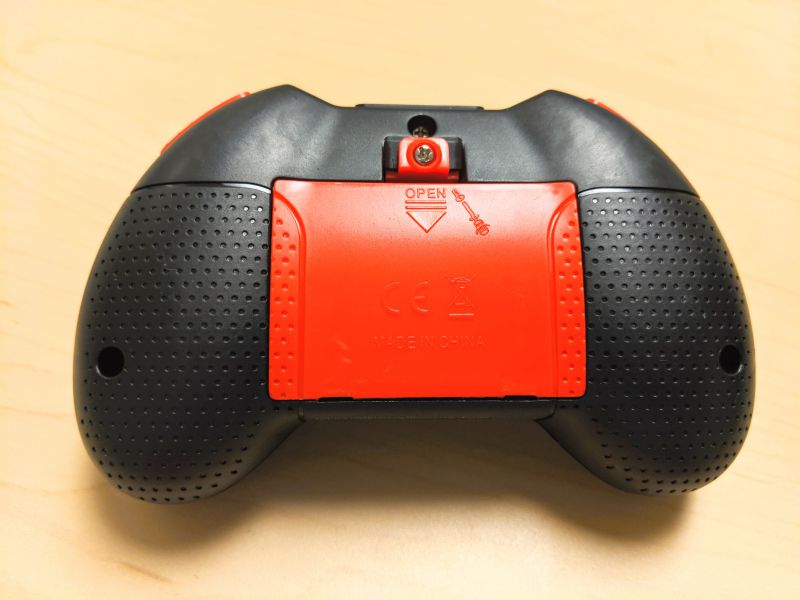 The controller takes three AAA batteries and the battery compartment can be accessed by removing a screw on the rear of the controller. 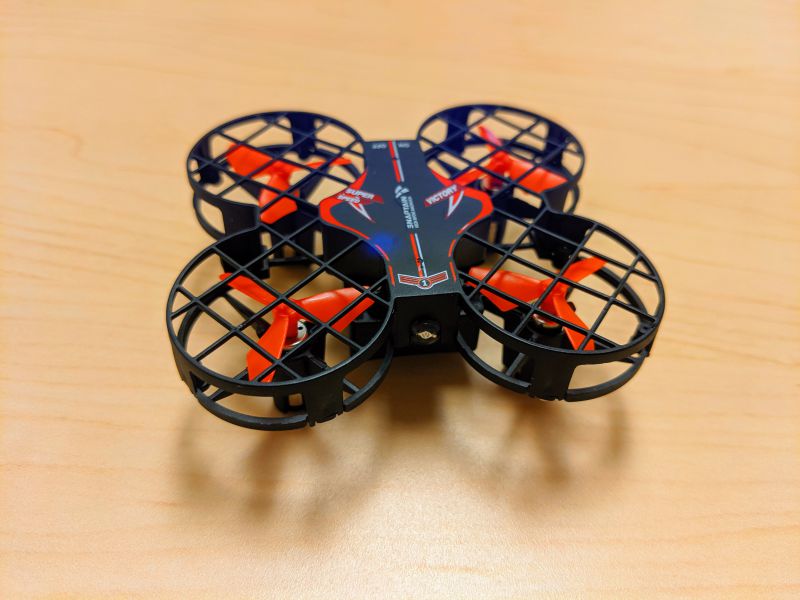 Luckily there’s no assembly for the SNAPTAIN H823H and one of the LiPo batteries comes pre-installed in the unit. 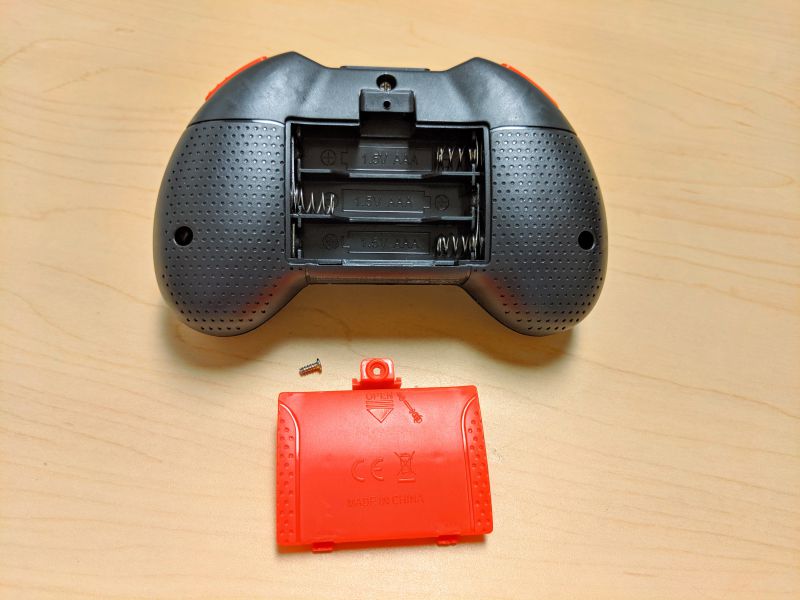 Out of the box though all of the drone’s batteries should be charged and three AAA batteries need to be inserted into the controller. 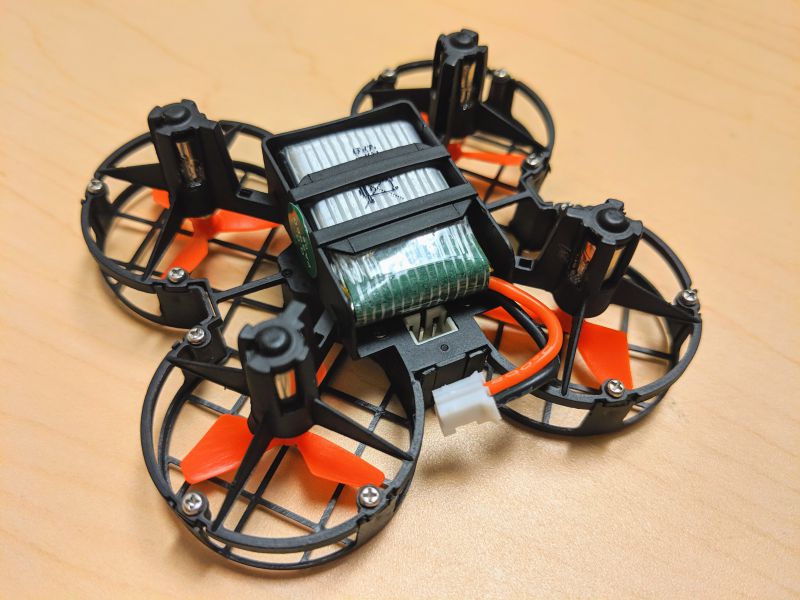 The drone’s LiPo battery can be removed by unplugging the power plug and sliding the battery out of the holder. 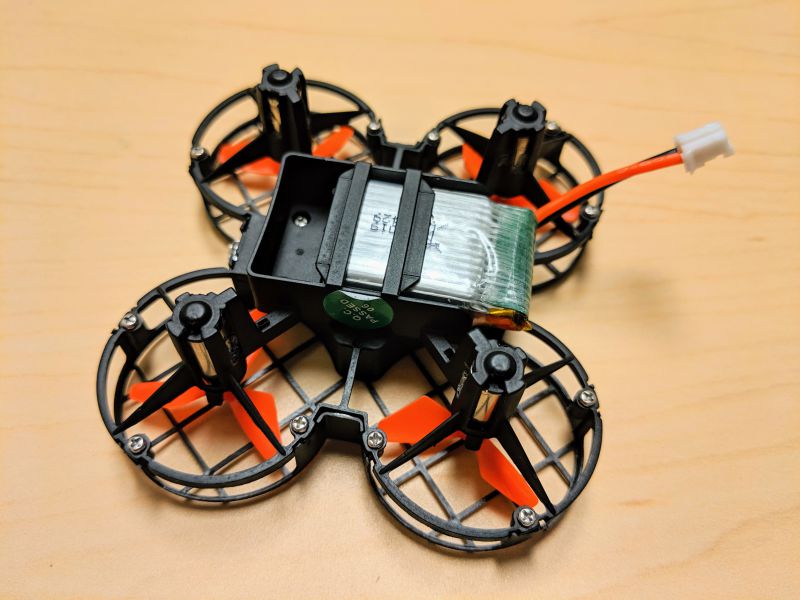 The batteries are charged via the included USB cables which plug into any standard USB power block or charger. 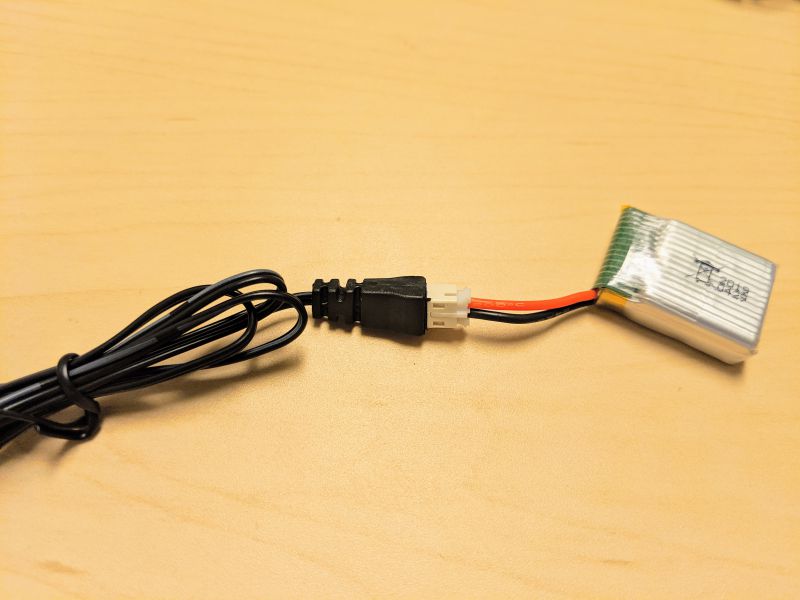 The only other maintenance for the SNAPTAIN, besides battery charging, is propeller replacement. This can be a bit of a challenge due to the propeller cover. 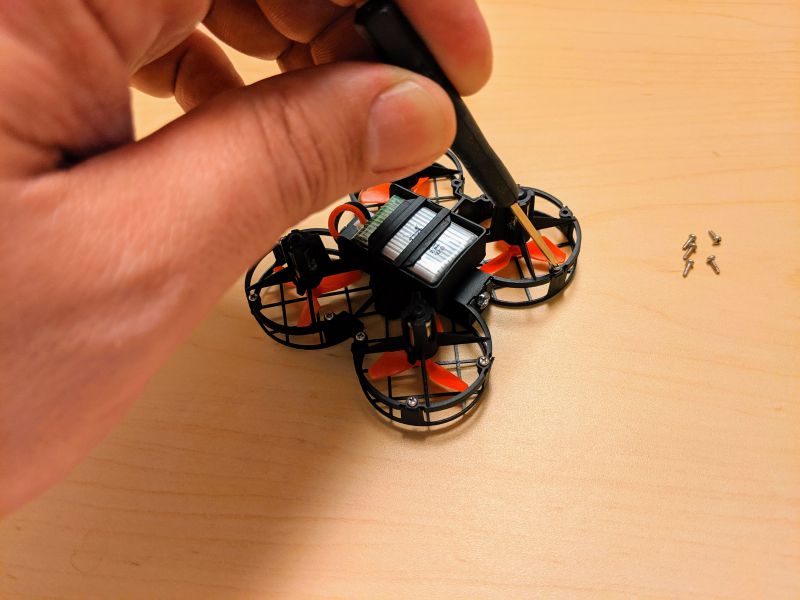 Three tiny screws have to be removed for each propeller to be replaced. After the screws are removed using the included screwdriver, the cover can be pulled back enough to allow for propeller replacement. It’s very easy to lose these tiny prop screws and it’s pretty difficult to work the old prop off for replacement, but with patience it can be done. 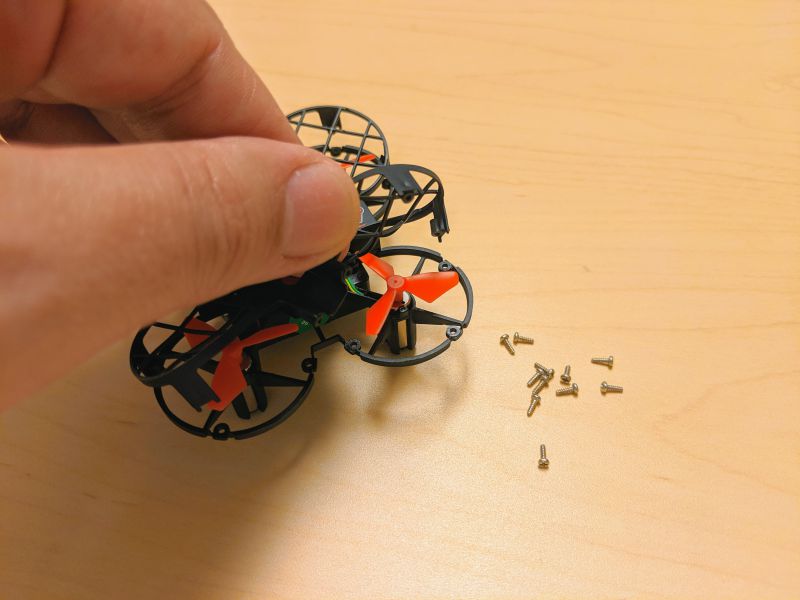 Since the SNAPTAIN H823H is geared toward beginners, I recruited two young hotshot test pilots, aged 5 and 7, to help put the drone through its paces. 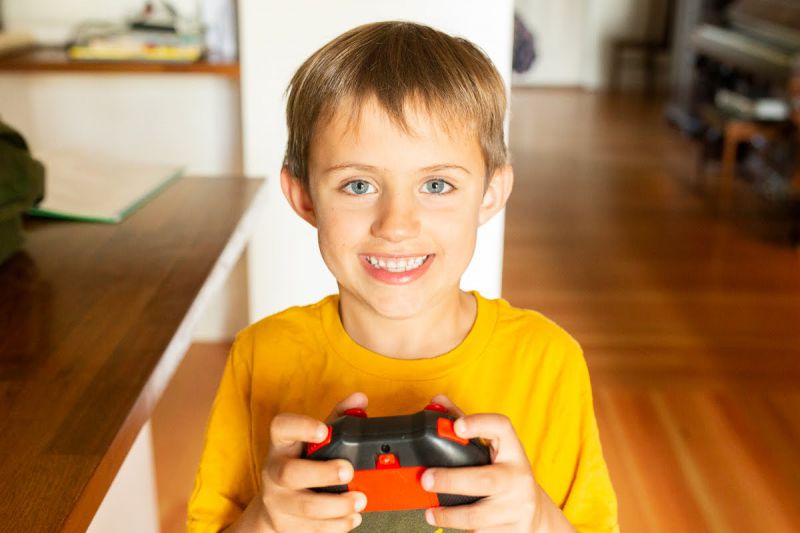 The extra options of the SNAPTAIN like headless mode, which allows you to fly the drone using your position instead of the drone’s, and auto takeoff and auto return were super helpful for our first time pilots. The problem is these features don’t always work properly, if at all. In fact the auto flip feature is the only feature that worked flawlessly every time and provided the most enjoyment. 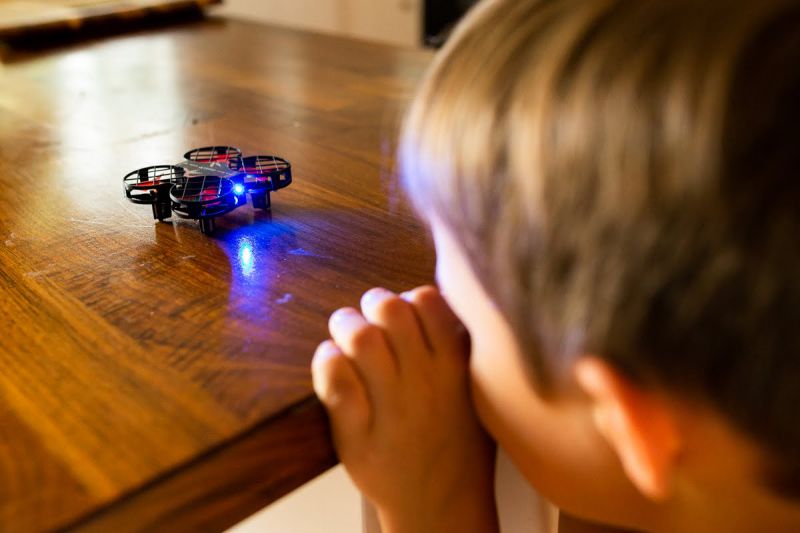 Another challenge with the SNAPTAIN is that before every flight it needs to be paired to the controller by pulling the joysticks down and up until you hear a beep. On a more expensive or higher quality drone you wouldn’t have to do this as often. Our flight team also found that the trims for the drone constantly needed to be adjusted. This was annoying because I have other drones around the same price range which don’t need such constant tweaking. 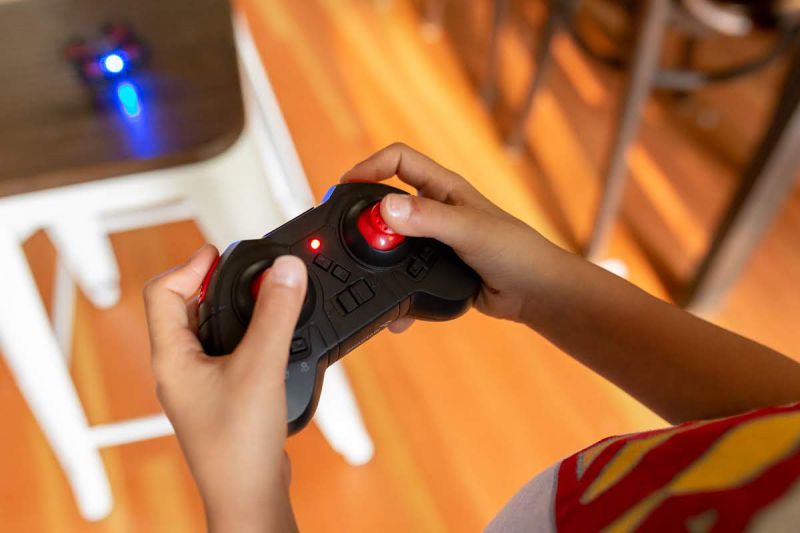 The three included LiPo batteries gave our flight crew about 21 minutes of flight time total and each battery took about 45 minutes to fully charge. 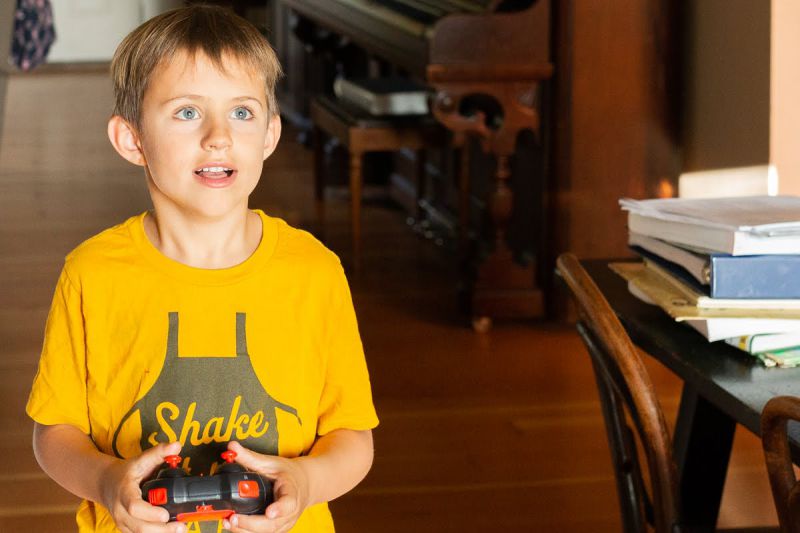 Overall, there was a slight learning curve for our mini Mavericks, but they soon got the hang of flying the SNAPTAIN and were routinely putting the drone through complicated maneuvers and expertly utilizing the flip feature. Our crew flew/crashed the SNAPTAIN around the house for a few days and the tiny drone held up very well, mainly because of the propeller cover protecting the drone’s most fragile parts. 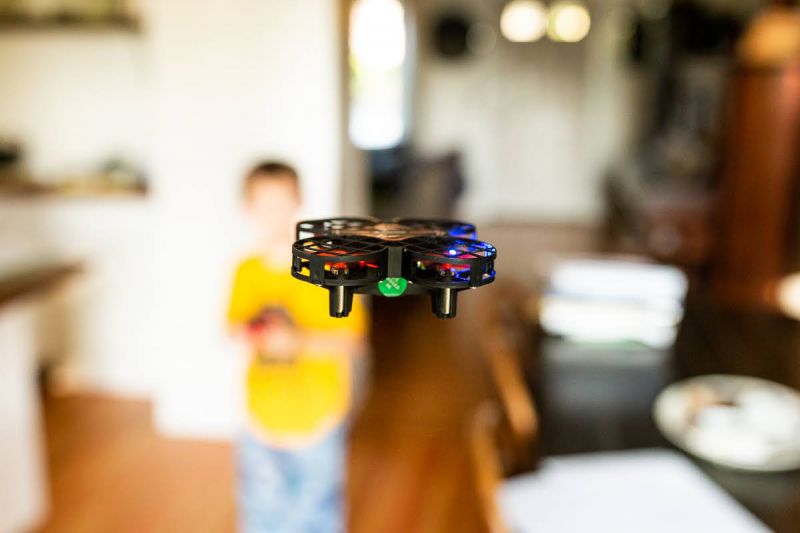 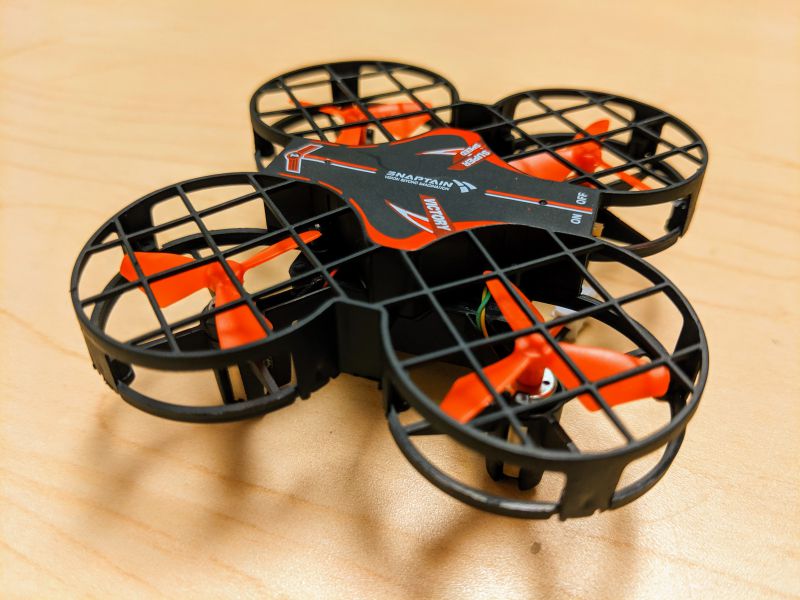 The SNAPTAIN H823H Plus Mini Drone is a fun, affordable drone whose $29.99 price is made even more attractive by the inclusion of extra batteries, props, and screws. The additional features of the drone are great, when they work, and they add to the fun and ease of use for kids and beginner drone pilots. Our 5 and 7 year old drone pilots had a great time with the SNAPTAIN, as most kids would.

Price: $29.99
Where to buy: Amazon and SNAPTAIN.
Source: The sample of this product was provided by SNAPTAIN.

SNAPTAIN H823H Plus Mini Drone review originally appeared on The Gadgeteer on September 14, 2019 at 9:30 am.