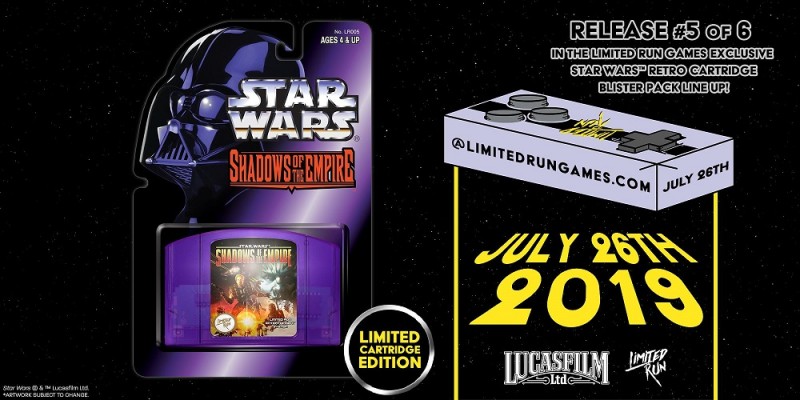 Limited Run Games had already announced at E3 2019 that it was partnering with LucasArts to release definitive collector’s editions of classic Star Wars games. Now we are finally seeing they what some of them look like, with the two titles releasing this Friday, July 26.

Relive classic moments from the film in Star Wars™: The Empire Strikes Back for the NES and Game Boy! This game continues our @starwars retro collection and receives its Limited Run on Friday, July 26 at 10am & 6pm EDT on https://t.co/5Lksol4sqo. pic.twitter.com/RA7IRLS76j

Shadows of the Empire is getting an N64 release, while The Empire Strikes Back is coming out for the NES and Game Boy. Both launch at 10 a.m. and 6 p.m. EDT.

Discover the story of mercenary Dash Rendar in Star Wars™: Shadows of the Empire on N64! This game gets its Limited Run and continues our retro @starwars collection on Friday, July 26 at 10am & 6pm EDT on https://t.co/5Lksol4sqo. pic.twitter.com/X7Kmibi2VU

Plenty more Star Wars games are scheduled to make a release. For more on the franchise’s video game adaptations, check out Kyle Hilliard’s cover of one of the classics.