Playing Through The Beginning Of Pokémon Sword And Shield

Pokémon Sword and Shield have looked impressive every step of the way, but while we were able to play through a gym at E3 this year, extended hands-on time has eluded us thus far. Thankfully, that recently changed. I played through the first hour and a half of Pokémon Sword to see how the Switch’s first all-new mainline Pokémon game is shaking out.

The first thing I noticed was I could use a Switch Pro Controller, something not possible with last year’s Pokémon Let’s Go, Pikachu and Eevee. I didn’t have the opportunity to create my own character, but you can still choose basic looks (gender, skin tone, etc.) from the get-go. Also, I played docked in TV mode. In TV mode, Pokémon Sword ran smooth, without any noticeable hiccups or framerate drops. 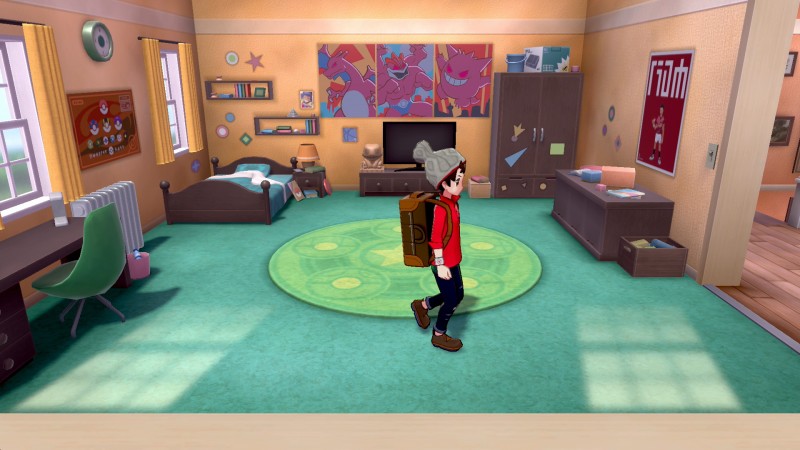 As with all Pokémon games, the story begins with a character telling you about the exciting world of Pokémon. However, instead of it being the typical professor giving the monologue, Sword and Shield open with a speech from Chairman Rose in the middle of stadium in the style of a TV broadcast. The speech goes over the same beats as your typical Pokémon opening, but sets the tone for the sports-centric atmosphere in the Galar region. After a brief speech, undefeated Galar champion Leon emerges to begin a battle with a character I can’t yet discuss. Leon calls out his trusty Charizard and the broadcast cuts away just as his Charizard grows enormous in size.

Once you assume control of your character, you’re inside your idyllic countryside home. Your mum (get ready for lots of U.K.-inspired slang, by the way) and your friend Hop encourage you out the door as you learn the basics of the game. After making it to Wedgehurst, the first small town in Sword and Shield, you run into Leon who is addressing the town. After a spirited speech, it’s revealed that he’s Hop’s brother. When you meet him again back closer to your house, Leon gives you your starter Pokémon. 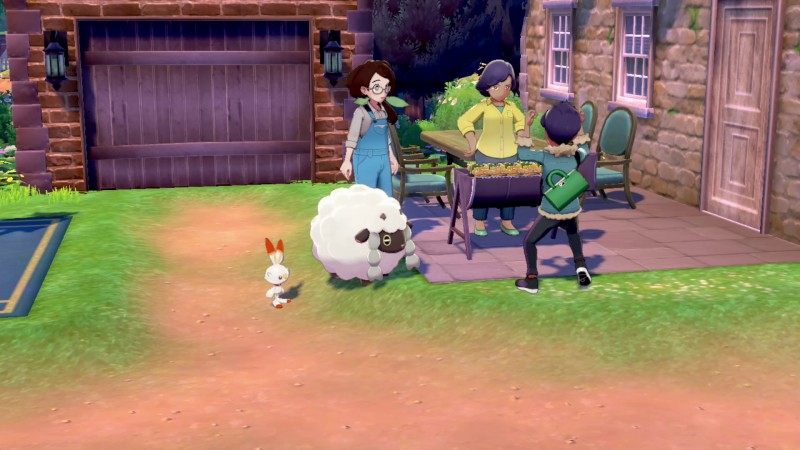 I choose water-type Sobble, and Hop scoops up Scorbunny; since he’s positioned as a friendlier rival than those from the earlier games, he always picks the Pokémon that’s weak to the type you choose. Hop’s overflowing energy matches that of Scorbunny, so in my mind, it’s a perfect match. Leon then recalls the sole remaining Pokémon, Grookey. With a subtle emphasis on Leon bringing the grass-type back to his possession, I ask if we’ll ever see that particular Grookey again. The team declines to comment. As is tradition, with our first Pokémon in our possession, I battle my rival.

The transition from the overworld to battle is flashy, with expressive trainer images leading directly into their Pokémon sequence. It feels cinematic, even though it’s not anything we haven’t seen in other games outside of Pokémon before. After winning the battle, it’s time to head back to Wedgehurst – this time to visit Professor Magnolia’s lab. However, upon leaving, a Wooloo has broken through the fence by your house, so you must wander into the eerie Slumbering Weald to find it. 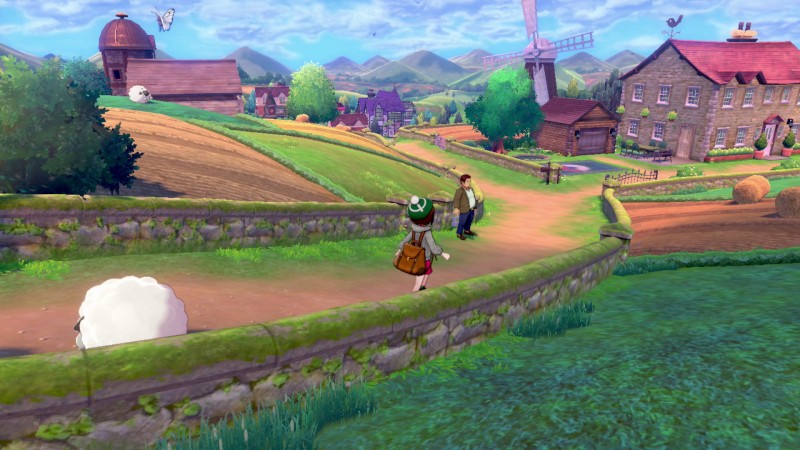 In the foggy Slumbering Weald, I run into a couple different types of new Pokémon, which I unfortunately can’t talk about. As I venture deeper into the woods, a mysterious creature appears before me. While I can’t spoil what happens, I eventually exit the Slumbering Weald, Wooloo by my side, and am back on track toward Wedgehurst.

After arriving at Professor Magnolia’s lab, it quickly becomes apparent that she’s not there. Instead, Sonia, Magnolia’s granddaughter and assistant, greets me. Unfortunately, Professor Magnolia is on a trip north of Wedgehurst, so I’m off once again. However, before venturing out of the town, I swing by the Pokémon Center. Galarian Pokémon Centers continue down the path of being one-stop shops for many of your Pokémon needs. In addition to healing your Pokémon through the nurse, you can also have their nicknames rated, rename them, or even delete moves. You can also access the PC and buy supplies in the shop. After stocking up, it’s time to venture to Professor Magnolia. 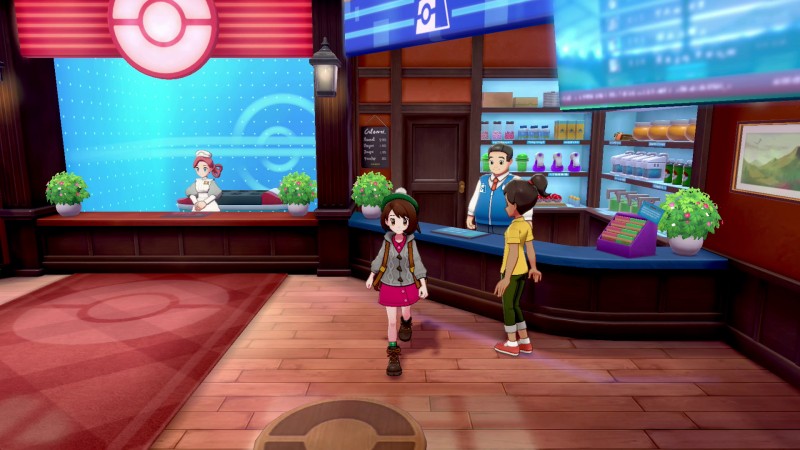 On the way to Magnolia’s location, I encounter seven different Pokémon in the wild. While I can’t say any of the creatures aside from Yamper, I love how different Pokémon appear in the tall grass through random encounters than do as creatures that roam in the environment. This not only gives you a sense of a living world, but also the mystique of being surprised when an encounter starts without you having initiated it. Catching Pokémon gives you experience, and each encounter splits the XP between your entire team automatically. You can also whistle to attract wild Pokémon to your position.

By the time I reach the end of the route, I have a full team of Pokémon that have reached just below or just above level 10. Unfortunately, my time is short, so I don’t have enough time to continue to grind and see the first evolution of Sobble. The water starter reaches level 12 before I admit defeat in this endeavor. 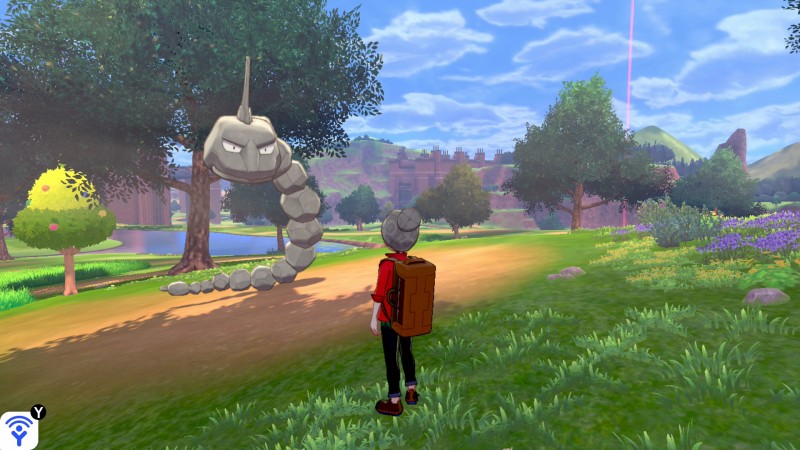 After meeting up with Professor Magnolia and Leon to learn about the Dynamax phenomenon she’s studying, you and Hop ask for letters of endorsements so you can compete against gym leaders to earn the right to battle in the Pokémon League. While the idea is initially met with hesitance – after all, you literally just got your starter Pokémon like 25 minutes ago – a battle with Hop changes their minds and you receive a Letter of Endorsement so you can challenge the gym leaders throughout Galar, starting with the nearest major city: Motostoke.

Once I receive the Letter of Endorsement, a shiny object falls from the sky. This Wishing Star grants me access to the Dynamax ability, which causes your Pokémon to grow massive and powerful in battle. Now it’s on to Motostoke, the first big city in my journey (you can see part of the city in our exclusive behind-the-scenes look at Game Freak). 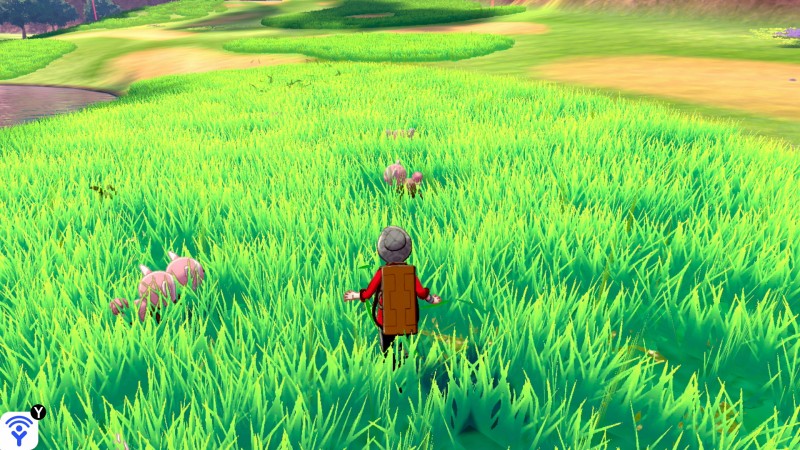 On my way, I find a TM for Swift. TMs in Sword and Shield are multi-use, so I don’t have to worry about painstakingly deciding which creature to use it on. Before I can make it to Motostoke, I must venture through the Wild Area.

The Wild Area feels large from the very beginning. In this part of Galar, the camera swings behind my character and I can rotate it 360 degrees. As I run through the area, different biomes present themselves with unique Pokémon running and flying around. I don’t have time to venture into the tall grass to see which Pokémon are hidden in there, but I notice the weather changes between the different parts of the Wild Area, dictating to an extent which Pokémon appear. 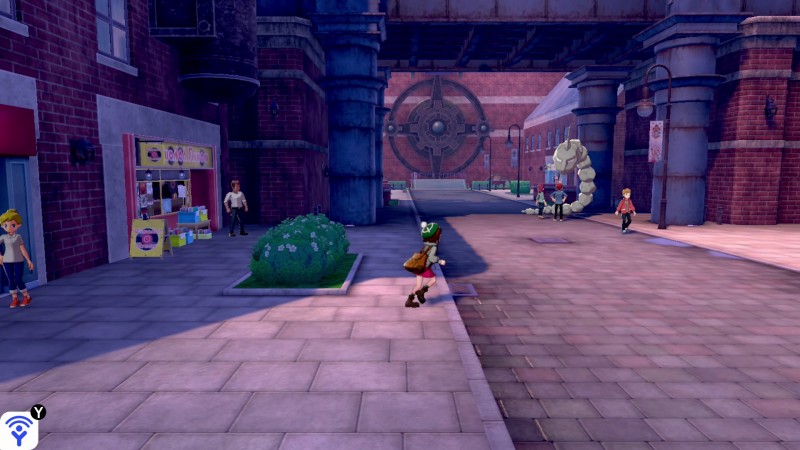 I finally arrive in Motostoke, a relatively giant town that puts Wedgehurst to shame. I have just enough time to tour around the streets, get a glimpse into the clothing boutique, and see the outside of the gym before my time with the game ends. After spending an hour and a half in Galar, I’m even more excited to see what lies beyond Motostoke and the Wild Area. Thankfully, we don’t have long to wait, as Pokémon Sword and Shield launch November 15.

For more on Pokémon Sword and Shield, be sure to check out our exclusive coverage hub by clicking the banner below.

The Outer Worlds is Now Available for Xbox One, Windows 10, and in Xbox Game Pass