Overwatch Has A DPS Problem

If you are playing Overwatch with random people, you usually have a pretty good idea how the match will unfold when the hero select screen appears and roles are assigned. In my experience of playing this game almost every night for the last two years, the best odds of success come from a group that selects two tanks, DPS, and support heroes, and the worst odds come from a team that loads up on DPS. That’s how the game is designed. Yes, I may luck out from time to time and land three snipers who are ridiculously talented, but all too often, DPS-heavy teams would lead to disaster for me. After all, Overwatch is designed around the idea of balanced teams.

Blizzard obviously heard people like me complain about the insta-lock Hanzos and unneeded Bastion pick, and made the difficult decision to add a role queue system to Overwatch’s Competitive Play. Role Queue makes it so that every team has to have two of each of the roles, and players no longer need to worry about having too many DPS units on the battlefield. This system embraces the true spirit of the game, but also leads to less variables for both offense and defense. In a last second push to secure a point, I can no longer abandon Moira for the firepower of Pharah. That strategy is effectively dead, and I’m okay with it. The play with balanced teams is far better than it was. I also hear less people screaming at each other in the pre-game lobby. 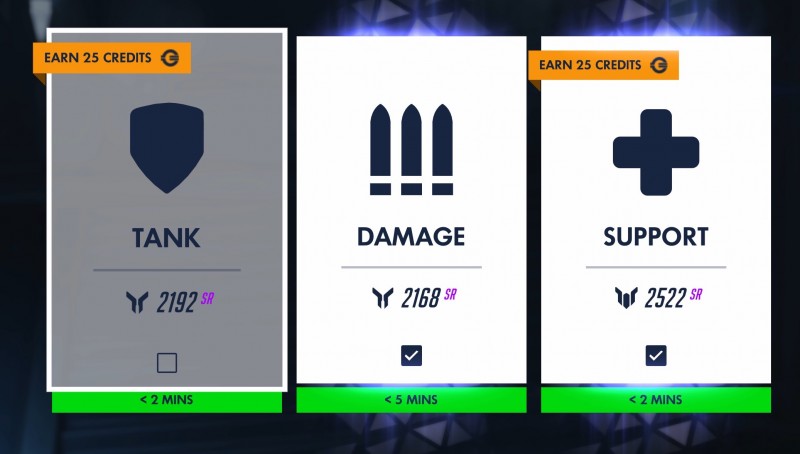 Those players who just want to play DPS are apparently still playing DPS. They don’t want to tank or heal. When I boot up Competitive Play under the new role queue system, I’m seeing two- to three-minute wait times to play as a tank or healer and five- to seven-minute wait times to play as DPS. Even though the estimated wait says five minutes, I’ve had to wait up to nearly 10 minutes to play DPS a couple of times. I’m almost waiting as long as a match actually lasts.

Blizzard is clearly trying to lure players away from DPS with incentives like a free loot box or credits if you play as a tank or healer. The gifts apparently aren’t big enough. The Junkrat player won’t stop playing Junkrat.

We’ll have to see what happens in the coming months, but you DPS-only players need to chill out on the DPS, or Blizzard needs to add a minigame I can play as I wait. The lost time isn’t worth it.

Cyberpunk 2077, Doom Eternal, and Among Us among Steam’s top selling games for 2020