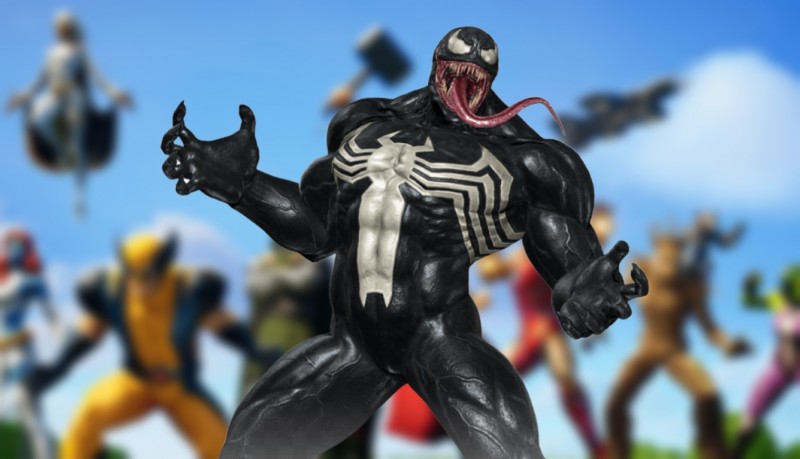 We’ve seen Iron Man, Wolverine, and more make their way into Fortnite thanks to the ongoing Nexus Wars event and it looks like the next Marvel character to be making his way downtown, symbiot-ing fast is Venom.

Marvel Games took to Twitter to tease a new themed skin coming to the popular battle royale game and it doesn’t take a seasoned fan to see that Venom is the next character up:

Following the most recent Ghost Rider skin in Fortnite thanks to Marvel Knockout, Venom is clearly the next addition on the way. The Nexus Wars event continues on its Marvel goodness through the end of November. For those that have been playing through the Nexus Wars event and its challenges through its start, unlocking Venom will be a piece of cake. That being said, newcomers shouldn’t fear missing out as well, because there is plenty to go around.

With the ongoing Nexus Wars event, we have seen Storm, Iron Man, Groot, Thor, She Hulk, Mr. Doom, and Mystique all make their way into Fortnite Battle Royale. With Venom rounding out the event, the end of Chapter 2 Season 4 looks to be ending with another big bang.

Marvel, Star Wars, music concerts; Fortnite has done it all since its inception, making it an interesting game to watch progress with each update, regardless if you play it or not. Epic Games has hosted movie debuts within the free-to-play game, world-shattering events, and so much more. Where could Epic go next? We have no idea, but the mega-company has more than proven that any limits we think the game has should probably just be disregarded at this point.

The Fortnite Nexus Wars event is currently for Battle Pass owners. You can learn more about what this particular event has to offer in the video at the top of the article.

What do you think about the upcoming arrival of Venom? What other Marvel character would you have liked to see crossover into the realm of battle royale? Sound off with your thoughts in the comment section below and tell us all of those fandom wants and dreams!

Xbox Series X – All Of The Confirmed Games