Like a freshman dreading their 8 a.m. class, Two Point Campus needs just a little more time. Two Point Campus’ release date has been pushed back from May 17 to August 9. As always, we appreciate the patience of our wonderful community and all your support throughout development.

In better news, you can check out the first hands-on media impressions of Two Point Campus at some of your favorite gaming outlets today. We’re excited to hear what everyone thinks of the game thus far and what you’re anticipating most. While the decision has been made to delay the release of Two Point Campus by a few months, the vision for the game has remained the same.

Two Point Campus lets you build the university of your dreams (or nightmares, we don’t judge), shepherd students from freshman year to graduation, and let them run wild with outlandish classes like Knight School, fossil-digging archaeology, or even baking giant pizzas in Gastronomy and much more. In Two Point Hospital, players couldn’t spend much time with patients, considering they either healed up and went on their merry way or, you know, died. Two Point Campus lets you really dig into each student’s life, and guide them on their social and academic journey. You can offer them a wealth of life-enriching experiences, be it clubs, social events, or more Cheesy Gubbins vending machines.

You’ll do it all on a campus designed by your very own hand, down to the very last desk and tree, offering way more customization than ever before. Maybe you’ll build a jousting arena for your gallant Knight School students and a tower to practice dragon-slaying from – or maybe you want something a little more cutting edge, and your campus will be a haven for budding mad scientists and building giant robots. 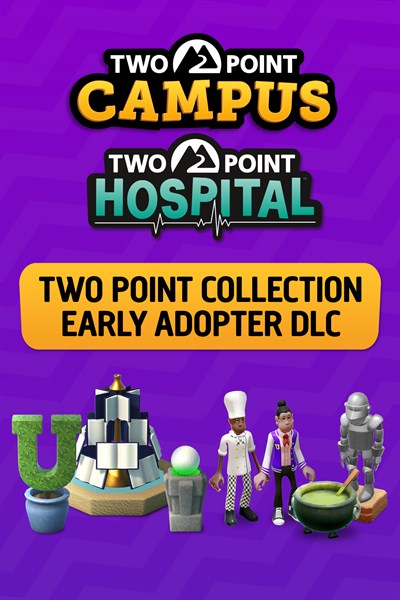 ☆☆☆☆☆
5
★★★★★
$39.99
Pre-order
If you pick up Two Point Campus nice and early, you’ll get your hands on these classy bonus items with which to adorn the grounds of your marvellous University creations. Spruce up the garden with a fittingly shaped ‘U’ Topiary, quench your thirst for learning with the Fountain of Knowledge (but please, don’t drink the water) and bask in the warm, academic glow of your very own Pearl of Wisdom!
But wait, that’s not all! If you also own Two Point Hospital, as an extra little treat, you’ll also get some Campus themed items with which to jazz up your hospital! Spruce the place up with the ornate Knight's Armour, get a bit bubbly with the Wizardry Caudron, cook up a feast with a Chef's outfit….and who wouldn't want to get their hands on the splendid Campus Jacket?! Now, isn't that good for your health? (Please, don't answer that).

Welcome to the Festival of Ages