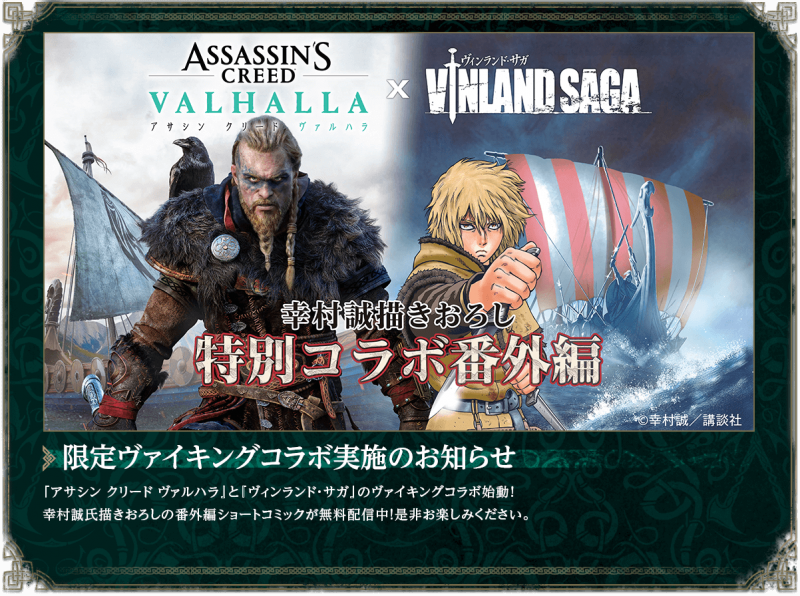 For those not familiar with Vinland Saga, it is a historical anime and manga series from Makoto Yukimura that had a stellar first season debut back in 2019. The story follows Young Thorfinn, a boy that grew up on stories of old sailors that went on limitless adventures in an effort to reach the legendary location of Vinland. As the war between England and the Danes grows more dangerous, and the Viking mercenaries grow more ruthless, Thorfinn takes revenge into his own hands to avenge his murdered father.

With the Viking tie-in being a major focus, the Vikings of Valhalla come into play. The news was revealed via Ubisoft Japan, alongside a sneak peek at some of the pages from the short story:

It will be interesting to see how much these two tales intersect and who all from the Ubisoft game will be featured in the short story. While we await season two news of the hit anime, this is a neat little way to celebrate both fandoms in a unique and surprising way.

Thoughts on the Assassin’s Creed Valhalla x Vinland Saga crossover manga? If you could blend any game with a popular anime, what would it be outside of the hodgepodge that is Jump Force? Sound off with your thoughts in the comment section below and tell us what you think!

Retro Studios Is Seeking An Art Director For Metroid Prime 4

Fast & Furious Crossroads Pulling Off Another Job Next Spring

Runescape Auto Chess “would’ve been lovely,” but Jagex was “a bit late” to the bandwagon