Rating: Everyone
Reviewed on: PlayStation 4
Also on:
Xbox One, Switch, Stadia, PC

I’ve played many racing games, but MotoGP 20 is a new kind of challenge that I wholeheartedly embrace. The high-speed, demanding bikes require a slightly different approach from the traditional race car techniques I’m accustomed to, breeding an internal competition for understanding and mastery that leads to a heightened tension on the track. This creates an appreciation for the bikes – their power and handling – that is a welcome change from getting behind the wheel of just another race car.

The need to make your rider lean into the corner to turn the bike and fight centrifugal force – with two wheels underneath you – is an added dimension that makes cornering feel different than in a car. Fine tuning your line through the corners is harder because even slight aberrations in your speed or lean can easily change your arc and cause you to lose speed. Just winging it or finessing the corner is more costly than in a normal racer. The satisfaction for a smoothly taken corner – or succession of corners – is truly its own kind of reward. And when it didn’t go well for me, I was thankful for the rewind feature that lets players correct their mistakes.

It may sound like just more to layer on, but I suggest you choose the option to split the control of the front and back brakes to separate buttons. The back brakes don’t have as much proportional power as those on the front, but they offer some extra control in the middle of a turn. Similarly, changing the amount of fuel you carry, and thus the weight of your bike, can have a big effect on your lap times. While running out of gas during a race is a nightmare scenario, using less gas in practice sessions is a good way to hit crucial R&D objectives in the career mode.

In the career mode (which features tiers of different-caliber bikes), you hire an agent to broker an amenable contract and technical directors to work with your staff to unlock and create bike upgrades. It’s straightforward off the track, but on the track during practice sessions is where it gets more interesting. In order to complete development tests to earn points for R&D, you have to hit specific lap times.

This is standard for a career mode, but it becomes fun when you start fiddling with your fuel loadout and sitting down with the track engineer for a guided setup. The latter is a great tool to customize the bike’s settings to how you race and what kind of feedback the bike is giving you. The track engineer asks you questions around specific gameplay elements, such as how the bike is handling in the middle of a corner, to give you the feel you’re looking for. It’s a simple way to modify the bike without asking you to actually grab a wrench and start tweaking things you might not understand. Making these tweaks and fixing any damage you incur during practice all take up valuable practice time – another aspect that adds stakes to the sometimes-boring race weekend format.

I wish other areas of the game were as helpful as the track engineer. Not only would riders of all skill levels benefit from tutorials on the finer points of bike riding, but the game does not explain crucial aspects like how the bike’s electronics work. Given how important things like fuel consumption and braking can be, it’s a shame that the electronics controls that affect these aspects and others aren’t explained. What is the AW number, and what does it mean when I raise or lower it? Even a simple racing academy with video and/or tests demonstrating how to take different kinds of corners would be welcome.

MotoGP 20’s online is also missing some key features. It has no matchmaking or larger league/season structure, even if you can tweak elements like turning on/off collision and filling out the field with A.I. racers if you wish. At least the historic mode adds a twist beyond just going through scenarios from the past. The mode’s daily challenges confer currency that can be spent on a revolving marketplace of real-life teams and riders for the mode (currently there is no way to spend real money here). It doesn’t come close to your standard sports game Ultimate Team-esque fantasy mode, but it’s new within the racing genre, and I’d love for it to be further developed in the future.

Racing is a constant challenge. Each corner, opponent, and straightaway is a chance to gain or lose positioning at a bevy of different points on the track. I’m used to that cadence, so to introduce new wrinkles that evolve and deepen the experience on and off the track is exciting. It feels like a new take on speed. 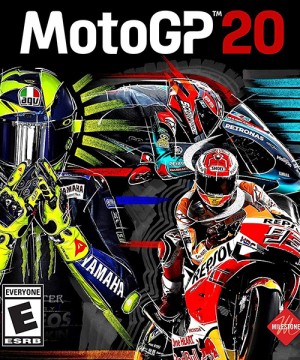 Summary: Racers looking for new challenges will find a lot to love.

Concept: Take on the particular challenge of these high-speed bikes through a solid career mode, a slightly surprising historic mode, and basic online multiplayer.

Graphics: The game isn’t exceptional in the visual department, but it runs smoothly.

Sound: Pre-race commentary exists, but it’s minimal and doesn’t amount to much.

Playability: Tutorials for aspects such as taking corners on a bike or the electronic bike controls are absent.

Entertainment: The curves come at you fast, but if you get into a rhythm you can unlock a rewarding racing experience.