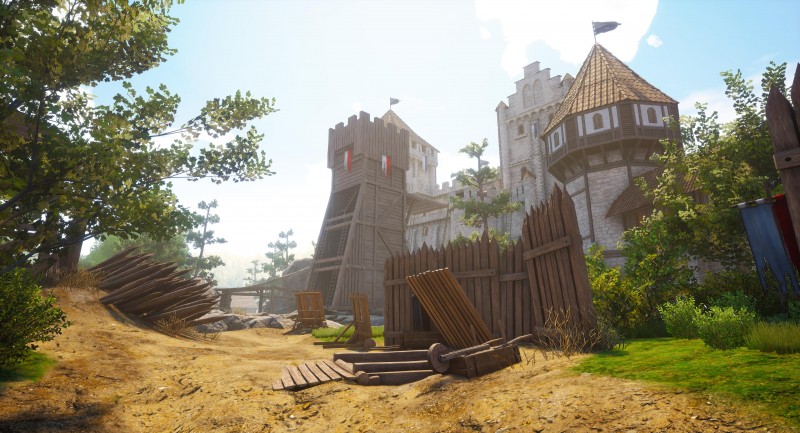 Mordhau developer Triternion has posted an update outlining some of the upcoming content coming to the game, while also revealing a few ways it plans to make the worst parts of its player base a little less annoying.

The game will soon be getting two new maps, Feitoria, Castello, which host a small village and sturdy south-European castle. Triternion didn’t announce a date for these new maps, but also emphasized it’s also going back to older maps to improve them, singling out Crossroads specifically.

A ranked mode is also on the way, with six ranks (which follow the usual bronze-silver-gold-platinum hierarchy, followed by diamond and elite), each with give sub-ranks, for a total of 30 ranks to attain. There’s also a new, 64-player attack-and-defend designed to “capture the feeling of a medieval battle.” This mode is still a ways off, however, and will not arrive in the next patch. With regards to balance, the developer is looking to nerf horses’ risk-reward ration and overall power, curb fire bombs and bucklers. It’s also hoping to make your swings look a little smoother without compromising the skill involved with wielding them (which is one of the key aspects of the game).

Coming off a recent controversy that began through a miscommunication involving a racial filter, the developer also outlined its plans to address the game’s toxcity and racism problems, as it’s something the team has been discussing ways to fight griefing and vote-kicking abuse. “We’re interested in adding more information to vote selection screen, such as the player in question’s team kill amount and team damage ratio, as well as a reason for the kick,” the team says. It’s also working on chat filters that will automatically remove “inappropriate or offensive messages” before players can even see them, as well as ways to more easily highlight players who might building structures to intentionally hinder their team, making it easier for others to vote to kick them from the team.

Finally, Triternion called out the demand for modding tools, but said the feature isn’t its highest priority. It’s on the docket for the future, however. For more info, check out the full update.