Keeping Storytelling Alive: Localization and Legacy in Vampire the Masquerade

It’s been more than two years since the release of Vampire: The Masquerade – Coteries of New York and almost one-and-a-half years since Vampire: The Masquerade – Shadows of New York premiered. As far as single-player, story-driven, self-contained games go, an obvious assumption to make is that once a title like that ships, the work is done and the project is complete, right? Well, not quite!

Vampire: The Masquerade and World of Darkness in general are properties beloved all around the world. The fan community spans the globe, and especially for games that rely on written content as much as Coteries and Shadows do, localization is extremely important. Back in late 2019 Draw Distance was just under 20 people strong (we’re somewhat bigger these days), and the team responsible for the standalone follow-up to Coteries, Shadows of New York, was roughly the same size. As you can imagine, when it comes to translations – which are crucial to let as many players as possible enjoy the stories we tell – outside help is needed.

And it’s not an altogether easy process, either! Not only does it require coordination between the core team and the translators, it also involves the license holder, who ensures that the game content is aligned to the brand, and takes care to keep each game consistent in terms of how setting-specific terms are used for each language. This takes the form of a huge glossary that answers nine out of ten questions, but some specific terms might have a history of being translated differently in the past, having fan-favorite terms that might or might not be reflected “officially” etc. – these need additional consulting with the license holder. Navigating all of that is no easy feat: it’s time consuming and requires the work of many people before a language update is released for the players to enjoy.

To date, Coteries of New York’s original English script has been translated and recently updated into Japanese, French, Brazilian Portuguese, Chinese, Spanish, Italian, Russian and German, while Shadows of New York enjoyed a French, Brazilian Portuguese and Russian translation – and we’re not done yet! In this way, our Vampire: The Masquerade games keep living on and being supported despite being “done” many months ago.

That’s not the only way in which our creative work becomes part of the World of Darkness story legacy, however. There is one important integration between our games and Vampire: The Masquerade.  World of Darkness brand team announced that next official Vampire tabletop actual play stream, “New York by Night”, is inspired by both Coteries and Shadows. The chronicle, which will broadcast first on Twitch and then on YouTube later this year, features events and characters who appear in both Draw Distance games. Chronologically, this story starts after the events of Coteries, and proceeds in parallel with the events of Shadows of New York video game. The streaming chronicle outpaces the events of Shadows, but does not identify a particular ending of the game, allowing everyone to enjoy both. We’re very excited to be bringing this new dimension to World of Darkness transmedia storytelling.

Now is a great time to explore the dark and evermore immersive Vampire: the Masquerade universe on Xbox, since the ID@Xbox Un-Halloween Horror sale starts today! 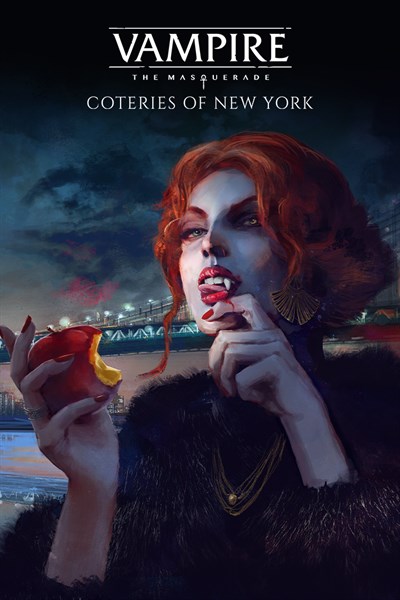 $3.99
Get it now
Vampire: The Masquerade – Coteries of New York presents the conflict between two vampiric factions: the traditionalist Camarilla and the fiercely independent Anarchs. It's a unique, atmospheric, single-player narrative experience, set in the rich universe of Vampire: The Masquerade 5th Edition.

– Choose one of three pre-defined characters and play as a Ventrue, Toreador or Brujah
– Each playable character offers a selection of powers (Disciplines), different ethical approaches to certain issues, and unique dialogue lines
– Character-oriented quests allow you to meet four unique NPCs: a Tremere sorcerer, a Nosferatu detective, a Gangrel of conflicted loyalties and a Malkavian multifoliate online personality with their own agendas. Win their hearts and minds and up to two of them will assist you in the finale
– Depending on your choice of the Clan you will be able to see the events from a distinct perspective. One playthrough is not enough to see all the game has to offer!

Take to the Skies with These Official Microsoft Flight Sim Accessories