I Love How Yakuza: Like A Dragon Humanizes Homelessness 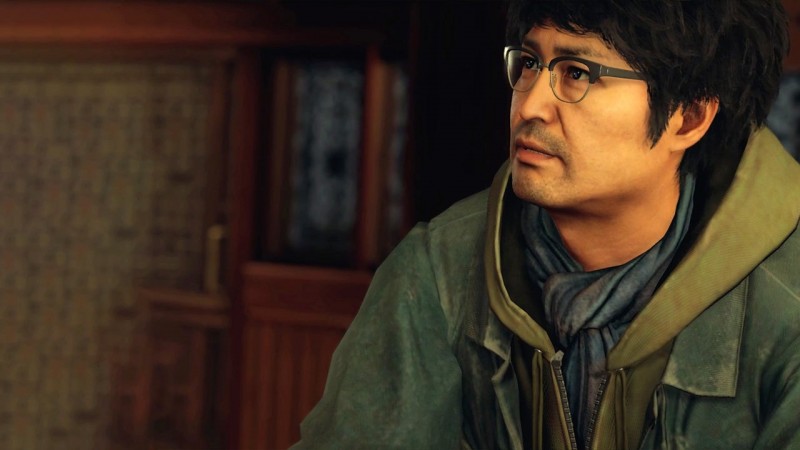 The Yakuza franchise has always had a strong track record regarding how it handles representation of marginalized groups, but Like a Dragon is a whole new ball game. My excitement going into the latest adventure starring a new protagonist had me anxious to dive in, but what I experienced as Ichiban Kasuga left me in tears numerous times throughout the story in the best way possible.

The homeless community plays a significant role in the latest Yakuza narrative, and while I had faith that the goodwill would continue in Like a Dragon, it’s always a hit or miss in media about how the homeless are portrayed. For me, the more negative annotations of the homeless hit particularly hard, because that was my reality for a large portion of my life growing up.

Without going into the details, many of my earlier years were predominately moving from couch to couch, sleeping in fast-food restaurants, parking garages, and (during one particularly dark year) cemeteries. Especially when I was young – a minor – and had no options as to where to go outside of shelters, that time in my life was terrifying, dehumanizing, and something that continues to color my experiences to this day. 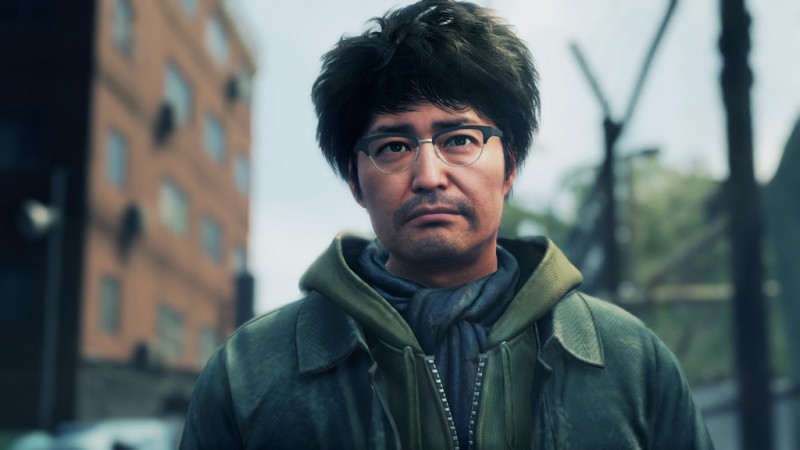 There are a million different reasons why someone would suddenly find themselves in the situation of living on the streets. Abuse, addiction, over-ambition; there is no one formula to suddenly find yourself without four walls to keep you safe from the outside world. Often in the media, the homeless community is seen as aggressive, dangerous, and addicts beyond reason. While that certainly is a reality for some, that’s not an accurate representation of everyone’s situation, but it’s that representation that continues to overshadow how our society views people who live on the streets, effectively stopping many from doing anything about it.

With a constant barrage of media representations that convey the message “these aren’t people,” it’s unfortunately easy for empathy to get eroded away by assumptions and preconceived notions. I was never addicted to any kind of drug, I didn’t have any grand scheme pulled out from under me. I was a kid who grew up in a volatile environment – an environment that made living out on the street a safer alternative.

Growing up and learning at a young age how to find my own safety, there were moments that crawled within my very psyche to tell me I didn’t matter. I was dirt, an inconvenience, and a person that didn’t deserve to even be looked at. I’ve been spit on, peed on, I’ve had bags of vomit thrown on my pillow. That reality seeped into my every being, making me terrified to look at people in the eye for fear of “dirtying up” their day. I found myself, and still do at times, apologizing just for existing.

People, at large, don’t care about the homeless. It’s a community ignored by some, used as a political ploy by others, and generally reviled by many. Yakuza: Like a Dragon counteracts those societal boxes placed on people that have found homelessness to be their new reality. No one wants to be in that position. No one dreams of being in that position. But so many find themselves in that position regardless, a fact that the studio over at Ryu Ga Gotoku takes special care to explore in a thoughtful and helpful way.

At one point in the story, our protagonist finds himself on the streets and taken in by the local homeless community. Some are welcoming, others are suspicious, and some became lifelong friends.

Every dialogue interaction means something in this game, and the interactions with the various characters throughout Like a Dragon each tell a different tale about how they’ve come to be where they are.

Yu Namba, for example, is a companion to Ichiban. We learn that he came to be in the situation we meet him in because his ambitions for money flew a little too close to the sun. As a nurse who stole drugs from the hospital he worked at to sell on the side, his illegal hustle expanded beyond what he could control. From success to stranded, Namba quickly found himself without a nursing license and without a means of income. 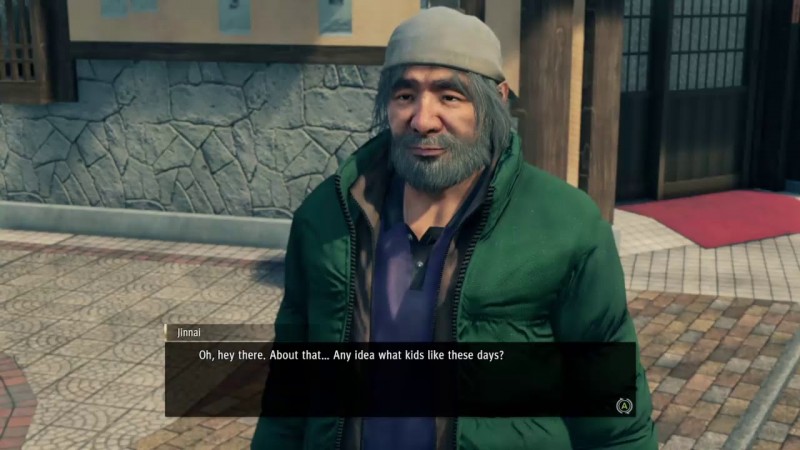 One sub-story is about a man who befriends a younger boy on his route to school. That boy that is around the same age as the man’s own son was before he lost everything. During this particular quest, Ichiban must help the “old man” named Jinnai to craft a gift for the boy’s birthday. The young boy, named Shota, is a professed reader with a love of new adventures. With that in mind, the quest then becomes a mission to build a bookshelf for Shota with materials found. “It’s the thought that counts,” the bookshelf isn’t the highest quality, but it was built from a place of love and knowledge of the recipient’s hobbies that make him happy.

When the gift is first given, the boy is so thrilled to receive it. He says he’ll treasure it always, a sentiment that warms Jinnai’s heart. To celebrate, Jinnai invites Ichiban for drinks, only to see the created bookshelf sitting abandoned atop a pile of trash. Jinnai thinks this is because Shota didn’t like the gift, a fact that Ichiban disputes by saying the bookshelf was a good idea. What broke me was Jinnai’s response, a response along the lines of ‘it’s not the bookshelf, it’s that it came from me.’ “People don’t want gifts from people like me,” he says, referring to how society as a whole views the homeless.

Luckily, the quest plays out and we discover that Shota loves the gift and that it was thrown out by his father, something that is also later settled in a heartwarming way. The look of relief and happiness that emanates from Jinnai felt like a punch to the gut in the worst and best possible way. I was so happy to see his story unfold and to see a happy resolution, but the truth about why he was so beat down to start with loomed as a reminder of times I’d rather forget myself.

This character wasn’t an addict either. He was a man whose only goal was to protect his family. During this questline, Jinnai confesses that he grew up poor so that when he married and had a son of his own, he worked “night and day” to make sure that his son never knew the struggles he knew intimately growing up. The irony is that he worked too much, and his wife felt disconnected to the point where she took their son and left. That abandonment acted as a catalyst for him to lose his job and his purpose and before he knew it, he was among the homeless. A man worked himself to the bone to protect his family and it backfired, but that makes him no less human. 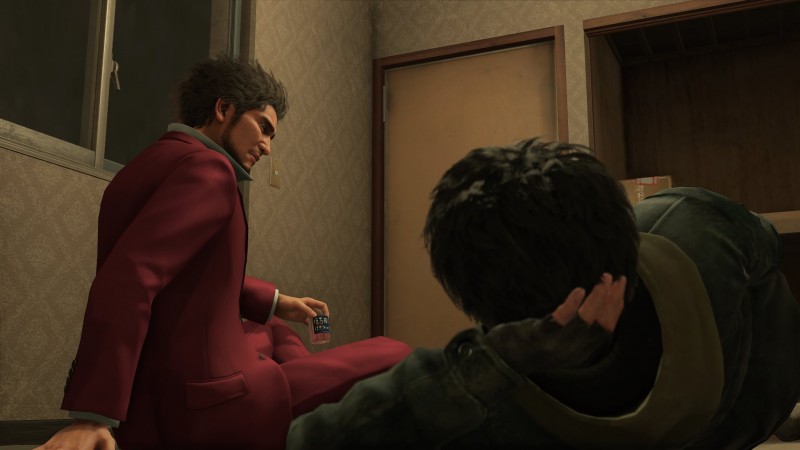 Another moment that struck out to me was the moment that Namba and Ichiban found themselves with shelter for the first time after meeting each other, getting a job at Hamako’s “restaurant” with room and board above the base of operations. There is nothing in the room except for two very dirty mats, but the pair couldn’t be happier, taking delight in a roof over their heads and a cold drink in their hands.

I bought my first home a few years ago, something I never in a million years imagined for myself. I remember our real estate agent was very much the “keep talk and feelings to a minimum” type, something I respected when dealing with him. So imagine his discomfort when we signed the house and my husband and I stood in the empty living room, our empty living room, and my knees buckled and broken sobs just came pouring out. This was mine. I earned this. I worked hard for this. I bled for it, I cried for it, I worked until I thought I was going to die for it. It was mine. That feeling of gratitude and disbelief is one that I will never be able to describe fully and to see that feeling reflected in that scene, even minutely, was a moment in gaming I will treasure always.

Borderlands 3 will use Denuvo

GI Show – The Last of Us Part II State of Play, Minecraft Dungeons, and Monster Train