G.I. Joe: Operation Blackout Looks to the ’80s for Inspiration

The G.I. Joe brand has been around since the early ’60s and has taken on many different forms. Sometimes the members of the G.I. Joe team look like your typical military soldier in familiar camouflage, sometimes they look more like Channing Tatum. While there may be debate about what the acronym in G.I. Joe stands for (general infantry? Government issue? Galvanized iron?), there is no debate over the best iteration of the G.I. Joe franchise – the ’80s comic book version that inspired the iconic animated show. And that is the version that G.I. Joe: Operation Blackout is looking to for inspiration.

G.I. Joe: Operation Blackout is a third-person, local multiplayer shooter (though you can play alone if you want) where you play from both perspectives of the immortal G.I. Joe versus Cobra conflict. The game’s original story, played across 17 campaign missions, actually begins during a rare moment of defeat for the G.I. Joe team. Cobra successfully pulls off a coordinated attack which results in chaos across the world as technology is rendered useless. Cobra is in charge and it’s up to a small surviving band of G.I. Joe soldiers to fight back and take down Cobra.

That’s the story of G.I. Joe: Operation Blackout, but there is more to the game than that. Seeing both sides of the conflict means you will be playing with both the heroes and the villains including Snake Eyes, Duke, Roadblock, Storm Shadow, Cobra Commander, Destro, and more that we’re hoping to keep secret, including many non-playable characters you will recognize from the G.I Joe universe. You can play the campaign missions with a local friend, or play local multiplayer with three friends in Capture the Flag, Assault, King of The Hill, and of course, the Deathmatch Arena. You’re simply not allowed to release a multiplayer shooter without some kind of Deathmatch mode. I’m sorry we don’t make the rules.

G.I. Joe: Operation Blackout is out on Xbox One today with a standard edition, as well as the Digital Deluxe edition that includes a bunch of bonuses like the Classic Duke & Classic Cobra Commander Character skins pack, the Battle Gear: G.I. Joe and Cobra Weapons pack, a digital art book with all kinds of never-before-seen art used to create the game, and a digital soundtrack, which will have music tracks from game plus bonus tracks from the 80’s TV show. 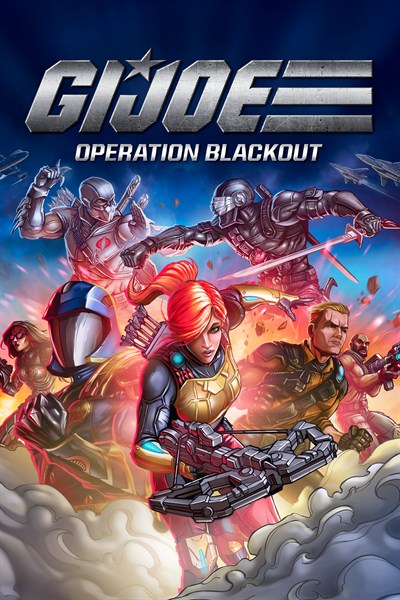 ☆☆☆☆☆
★★★★★
$39.99
Get it now
G.I. Joe and Cobra are back! G.I. Joe: Operation Blackout is a classic team-based third-person shooter where you play as your favorite characters from Team G.I. Joe and Team Cobra. Experience the action from both sides as you help G.I. Joe restore order and lead Cobra to world domination.

G.I. JOE VS COBRA – Play with 12 of your favorite characters from both sides including Snake Eyes, Duke, Roadblock, Storm Shadow, Cobra Commander, Destro and more in 4-player PvP and across 17 epic campaign story missions.  Includes voice acting for over 20 iconic characters in the G.I. Joe universe.

COMBAT TOOLS – Fight for your side with 18 awesome weapons, 36 weapon skins, 12 alternate character skins and a series of uniquely devastating ultimate abilities.

LEGENDARY FRANCHISE – Take control of the iconic G.I. Joe Persuader and Cobra H.I.S.S. tanks in your battle across classic locations like the USS Flagg and Cobra Headquarters.

CO-OP & PVP MULTIPLAYER – Play the campaign with a friend in local co-op, or compete in 4-player PvP local matches in 4 Multiplayer Modes: Capture the Flag, Assault, King of The Hill, and Deathmatch Arena.

What’s Next for Xbox Game Bar