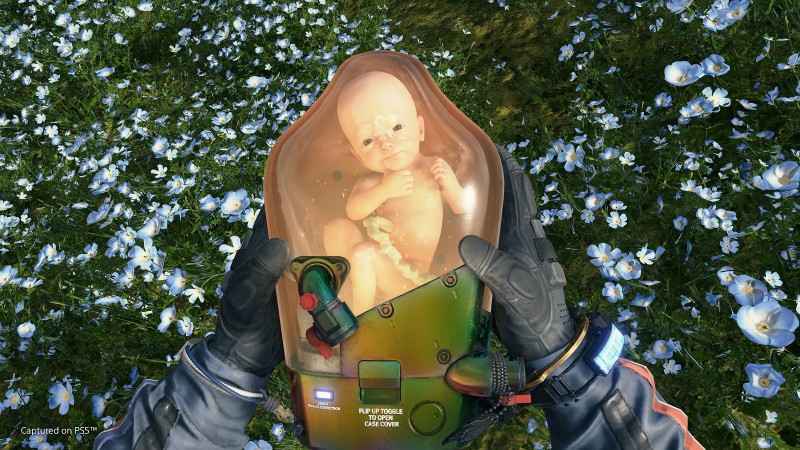 Hideo Kojima is inviting us to take one last look at Death Stranding: Director’s Cut before launching on September 24. The final trailer for this re-release is directed by Kojima and ends up being a musical journey through Death Stranding’s disturbing world.

The trailer clocks in at just under five minutes, and while giving viewers a brief look at this version’s new content, is mostly an exploration of the key moments that shaped the story and characters of the original game.

Kojima doesn’t hold back on showing notable moments, so I’m going to throw a SPOILER warning out there for those of you who haven’t played the game yet. If you’ve been thinking about picking up this version, I’d avoid the trailer. If you already played it, and have had many discussions about the baby strapped to Norman Rededus’ chest,  jump right in – Kojima’s cut is a nice way to relive this wild experience.

The song used in the trailer is “Goliath” by Woodkid. Kojima took to Twitter to discuss just how much he appreciates this artist. “Even when I listened to it again, the edited images came up. I can’t get it out of my head,” he wrote. “This is the kind of harm that comes from creating a PV with a song I love.”

Death Stranding Director’s Cut is a PlayStation 5 exclusive that will feature a wealth of content that wasn’t featured in the original game. Some of this new material will expand upon the gameplay, such as new stealth mechanics and ways to haul cargo using a “Buddy Bot.” And true to many of Kojima’s re-releases, some of the content is just for fun, like being able to perform stunts on your bike or race around a track in a car.

Are you a fan of Death Stranding? If you haven’t played it, are you thinking of picking up this new cut? Let us know your thoughts on this release in the comments section below.