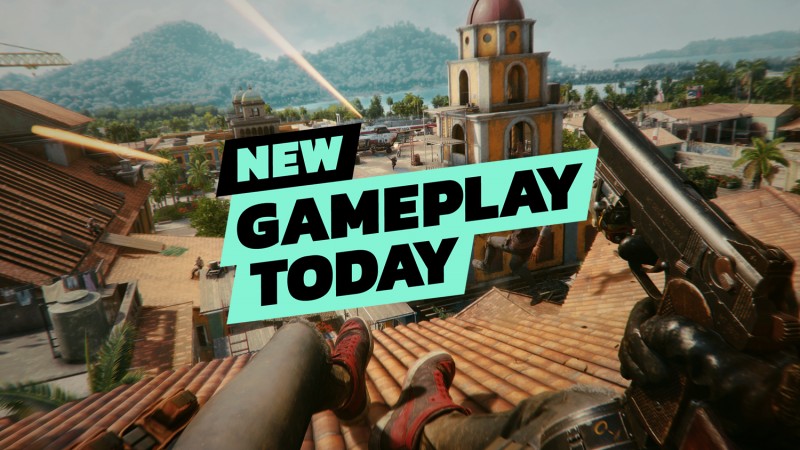 The Far Cry 6 release date is just around the corner, and we were lucky enough to go hands-on with the upcoming first-person shooter and saw many of the gameplay opportunities that the Island of Yara offers. With its antagonist being played by the famous Giancarlo Esposito, many fans are hopeful that this entry in the Far Cry series will return to form by featuring an unforgettable performance by the game’s villain. Join Alex Stadnik, Brian Shea, and our wonderful production director, Margaret Andrews, for another episode of New Gameplay Today, wherein the trio shows off brand new Far Cry 6 gameplay!

Far Cry 6 starts with a bang from both narrative and action standpoints. I’m curious if Ubisoft can carry forward with these emotional gut-punches without falling victim to the cognitive dissonance for which Far Cry is often known. Hopefully, the enjoyment we get from flying around in our wingsuits, firing over-the-top weapons, and fighting alongside a cute wiener dog named Chorizo doesn’t contrast too harshly with the story of an island in political peril. Only time will tell if Ubisoft can balance these disparate tones, but in my time playing, I had a blast and still felt the weight of the dark narrative beats.

Did you enjoy this early look at Far Cry 6? If so, subscribe to the Game Informer YouTube channel so that you don’t miss our full Far Cry 6 review when the game launches this October! If you’re interested in seeing the latest footage of upcoming games, be sure to check out other episodes of New Gameplay Today here. As always, leave a comment down below, letting us know if you’re excited to play the latest entry in the Far Cry series.