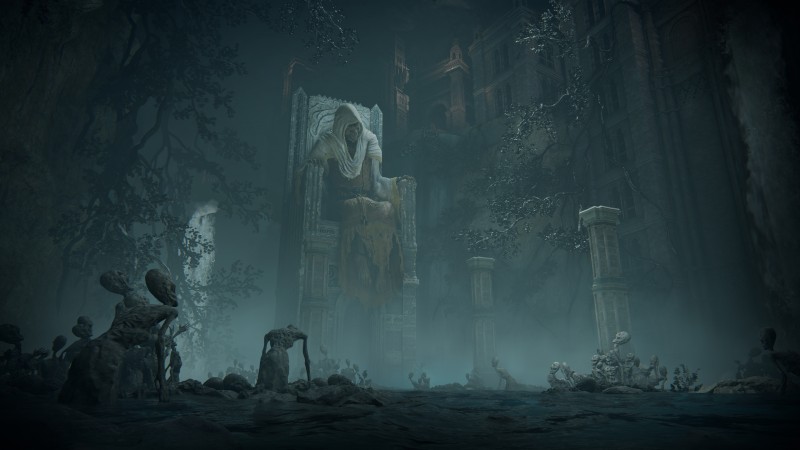 In a fifteen-minute video we had a chance to view on the upcoming Elden Ring, From Software showcased the first legacy dungeon in the game, Stormveil Castle. What’s a legacy dungeon, anyway? These legacy dungeons are similar in scale and scope to areas that players might be familiar with in terms of Dark Souls dungeon areas and are not part of the open world that Elden Ring embraces. Instead, these legacy dungeons have all the bits and pieces that players can expect from curated From Software dungeon romps, including NPC interactions, looping levels, dropdowns, probably elevators, and various paths to take and secrets to find on the way to a big boss or bosses behind a fog gate.

In this quick showcase, we’re informed that Stormveil Castle is the first dungeon, though players are not going to be constrained with a certain order of legacy dungeon completion in most cases. However, you cannot go to the final dungeon as straight away as you could in say, The Legend of Zelda: Breath of The Wild. We don’t know the mechanism behind that, and quite frankly I’d rather not know until the game releases so I’m glad From isn’t talking about that at the moment.

In Stormveil Castle, the player is presented with a choice at the onset via an NPC – Head directly through the front gate or take a longer side route. Storming the gate involves charging head-on into a slew of arrows and meeting a gigantic troll face-to-face, so seasoned veterans are likely going to open the door, roll thirty times, and make their way to the boss.

The side path is long and winding, up narrow corridors and rickety planks, much like you’d see climbing up Boletaria Castle or any of the other Souls-castle sides. Of course, archers and enemies seek to knock you off the precarious positions and cause you to fall. Along the way, we see some other signature Souls dungeon design elements, like dropping down from positions to find secret rooms. One of these rooms contains treasure and what appears to be yet another From Software staple, the early game knight monster that’s harder than the other enemies around, featuring a shield and some light magical accouterments. After that, our hero sees the same giant troll mini-boss creature that our headstrong warrior did, but by taking the side path, this character gets to tackle the huge problem from behind. With the troll unaware of our hero’s presence, the player uses a sleep dart on it to disable it and dispatch it quickly. Sleep darts are an excellent way to disable an enemy and guarantee a critical strike (similar to a visceral attack in Bloodborne) on a foe. Behind the troll lies a fog gate, a classic indicator in From Software games that a boss area is ahead. 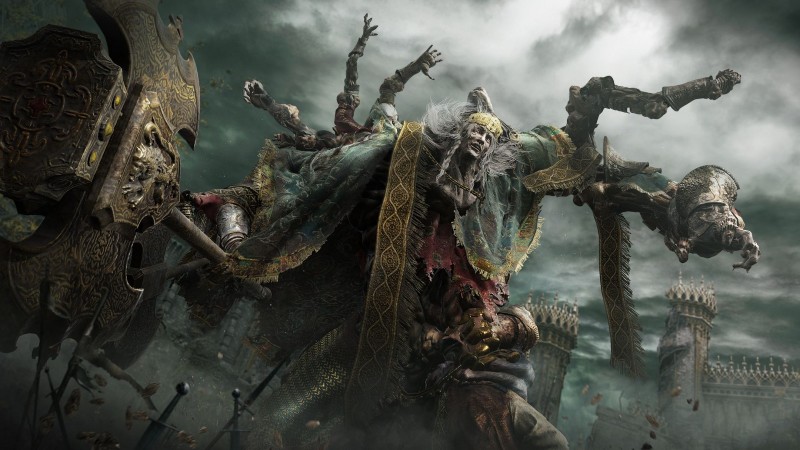 A boss in Stormveil Castle

This boss is a multi-armed, massive humanoid creature that players have seen in previous preview screenshots. The boss is surprisingly fast for being so huge and wields multiple axe weapons. It was difficult to tell from the footage whether or not there is a “heat-up” or transformation as the player damages the boss, but in some of the footage it is easy to notice that one of the arms is actually a dragon head, something I am not sure was present at the onset or happened midbattle as part of a phase transition. The dragon head arm naturally breathes fire and can grab the player and fling them around or kill them. The boss jumps around all over the place, slams the ground, and is generally pretty awesome to behold. The action is incredibly fluid, and this looks like a very by-the-book From Software boss, which is expected for what’s considered the first canonical dungeon crawl in the game. It’s not known if this is actually the end boss of this area or simply one of the multiple bosses in Stormveil Castle.

The dungeon romp looked great, and I can’t wait to try to take on the main entry gate when Elden Ring arrives on January 21, 2022.

Calm Yourselves, Splatoon 3 Wasn’t Just Teased By Nintendo After All

Star Wars: The Force Unleashed For Switch Has Been Updated, Here’s What’s Included