Down the Rabbit Hole with The Matrix Awakens: An Unreal Engine 5 Experience

What happens when you combine the world’s most powerful game engine with cutting-edge console technology? The Matrix Awakens: An Unreal Engine 5 Experience is a new tech demo that showcases just that.

Created by members of the original “The Matrix” movie team including Lana Wachowski, James McTeigue, and John Gaeta in collaboration with teams across both Epic Games and partners, this experience offers a glimpse at what interactive storytelling and entertainment created with Unreal Engine 5 could look like in the future.

Neither game nor film but combining elements of both, the demomorphs from a cinematic featuring incredibly realistic digital replicas of Keanu Reeves and Carrie Anne-Moss to a high-octane interactive experience of car chases and fast-paced third-person shooter action.

The driving and shooting sequence is unique every time you run it. That’s because the car crashes are simulated in real time with Unreal Engine’s high-performance physics system Chaos, so the same crash will never occur twice.

Mirroring the way live-action moviemakers will scout a city to find the best streets to tell their story, the team explored different creative options for the cinematic content by driving cars around the virtual city to capture compelling shots. Because this process took place within the virtual environment, it didn’t have the physical constraints of the real world—taking hours to travel from one location to the next, for example.

Everything in the demo takes place in a vast open-world city that spans 16 square kilometres. The sprawling metropolis contains seven million instanced assets, each made up of millions of polygons including seven thousand buildings, 45,073 parked cars (of which 38,146 are drivable), over 260 km of roads, 512 km of sidewalk, and thousands of intersections, lamp posts, and manholes.

The demo is able to handle this geometric complexity thanks to Nanite, UE5’s virtualized micropolygon geometry system. Nanite is next-gen technology that has the power to process and stream billions of polygons, delivering an extraordinarily high level of detail and visual fidelity. A powerful audio generation system replicates the sounds of a bustling city, enhancing the sense of presence in the experience.

The virtual city is impressively photoreal, harnessing Unreal Engine’s powerful lighting systems to deliver highly realistic lighting and reflections throughout the interactive parts of the demo and generate beautiful, realistic soft shadows of the characters in the cinematic element.

A city is more than bricks and mortar, of course—it’s the hustle and bustle as a multitude of people go about their business. Thousands of digital humans and vehicles teem around the city, powered by artificial intelligence systems. Because these actors are part of a global simulation that is constantly evaluated, they effectively exist whether you are looking at them or not—which means they act in a much more believable way.

After seeing the impressive demos that developer The Coalition created this summer, the team was brought onboard to explore how Unreal Engine could maximize the full potential of the Xbox console hardware.

Their help enabled the experience to run at an impressive level of performance and quality not just on the Xbox Series X, but on the Series S as well—proving that next-gen content can be experienced on the full range of today’s consoles, benefiting players and Unreal Engine developers alike.

The Matrix Awakens: An Unreal Engine 5 Experience shows how the next generation of interactive experiences will offer stunning photorealism, incredibly rich and complex open worlds, and ever more engaging action.

Download the tech demo for Xbox Series X|S to explore the future of interactive storytelling and entertainment today! 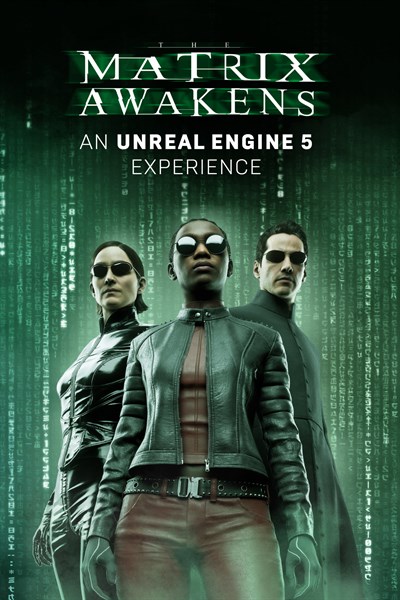 ☆☆☆☆☆
237
★★★★★
Get it now
'The Matrix Awakens: An Unreal Engine 5 Experience' is a free, boundary-pushing cinematic and open-world interactive tech demo that combines the power of Xbox Series X/S with UE5.

An original concept written and cinematically directed by Lana Wachowski and James McTeigue, this boundary-pushing technical demo features Keanu Reeves and Carrie-Anne Moss reprising their roles as Neo and Trinity while also—in a blending of the real and unreal—playing themselves.

Many of the VFX crew from the original film came back together for the digital execution of the experience, including John Gaeta, Kim Libreri, Jerome Platteaux, George Borshukov, and Michael Gay, in collaboration with teams across both Epic Games and partners such as SideFX, Evil Eye Pictures, WetaFX (formerly Weta Digital), and many others.

The demo morphs from breathtakingly realistic cinematic to fast-paced third-person shooter experience, complete with action-packed car chase sequence, and also provides a rich, vastly detailed open world to explore, set within the universe of 'The Matrix'.

Download it now to experience the future of interactive storytelling and entertainment with UE5."

Related:
How The Coalition Worked with Epic to Bring The Matrix Awakens to Life on Xbox Series X|S