Diablo Immortal: Why Fans Should Give It A Chance 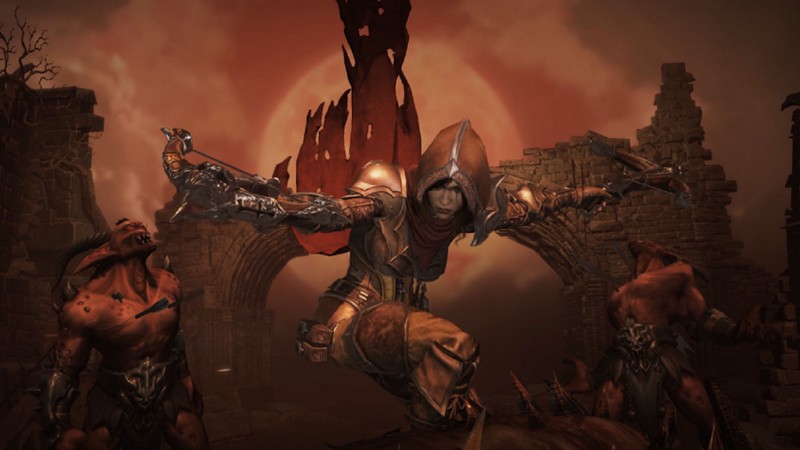 A few years back when Diablo Immortal was unveiled, I was less than enthused. Headlining Blizzcon with a mobile game when the Diablo community was desperate for anything related to Diablo 3 or 4 was a rough reveal, and what’s more the game didn’t look or feel anything like I was hoping it would. I’ve been playing Diablo games since the original game. I remember being eaten by the Butcher, picking up the oddly-boxed Hellfire expansion (Yeah did you know Sierra made and published a Diablo expansion? What wild times those were…) at CompUSA and going hard in the very Zerg-inspired Hive, and that was just a taste of how important the franchise would become in the annals of gaming. Diablo II set the standard for the ARPG genre when it was revealed, and it’s still the title that all others are measured against. I still have an awesome hardcore-mode ear collection out there somewhere. I’ll never forget my level 80 necromancer dying to Izual when my dorm room ethernet blinked out for a few moments during a Diablo II LAN party. Yeah, we did those.

But enough about me. This is about Diablo Immortal, the upcoming mobile Diablo title that’s been excoriated and eviscerated since its calamitous reveal. Having had a chance to play a ton of it now in its Technical Alpha period featuring a deluge of early and mid-game offerings, I’m happy to report that it’s a real deal Diablo game, and even features some aspects that could move the franchise and the genre forward in interesting ways. Do I wish there was a PC version? Yes, absolutely. Are we still getting Diablo IV? You bet. For now, it’s a good time to plunk away on your phone if you want a new demon-slaying snack.

The setting, characters, and enemies are excellent. Because the game occupies sacred space between Diablo II and Diablo III canonically, fans get the best of both worlds. Deckard Cain is still around so we can stay awhile and listen. The Countess is a badass boss that we can continue to farm forever. The jibbering fetish army that we dreaded to face off against in the jungles of Diablo II is back, conjuring up pint-sized terror. Even cooler, we get nods to connective tissue story beats that tie the games together… Have you ever teamed up with Zoltun Kulle and Tal Rasha to take on Baal? You will. Without any other spoilery stuff, it’s beyond clear that the team behind Diablo Immortal decided to lean in on nostalgia, lore, and fan favorites to create an awesome cast of allies and villains.

From that broad basket of favorites, the currently accepted ARPG mechanic of procedurally generated levels is still a big component. Once you’ve gone through the questing and campaign, there are always rifts to do. They were a staple of Diablo III, and they’re a staple here. The concept of dungeon and boss runs coexists side-by-side with rifting in Diablo Immortal, and that’s a smart choice that freshens up the cycle of endless runs. From Diablo III to Path of Exile to Torchlight III, the endgame of ARPGs is currently defined by randomized tilesets with all manner of randomized modifiers and encounters.

Diablo Immortal lets you transfer your item upgrades by slot. What does this mean? Well, if you find an awesome legendary pair of boots and you find a new one that’s even better, it was traditionally a pain and a resource sink to get the new pair up to speed via rerolling and enchanting. Now, you can keep the modifiers in the slot when you stick a new piece in. Upgraded your rare pants all the way up, stacked with strength and vitality? King Leoric drop you a new piece? It’s just a swap away, and your buffs stick with the slot if you choose. This is a great feature that I hope becomes a mainstay for Diablo (and other ARPGs).

While movesets are somewhat limited compared to core Diablo titles, the game plays surprisingly well given its mobile control constraints. Rift grinding looks and feels a lot like it does in Diablo III, and that’s a far cry from where we were a few years ago. While some aspects still are unknown, such as monetization specifics and what endgame experiences will look like (The alpha is capped at level 45), there’s some other enthusiastic injections here. You can see other players while traveling the lands and just sort of organically team up to take on whatever enemies and bosses are around. Do dungeons and rifts with your friends. In fact, “Hell 2” dungeons are always scaled for a four player party, so I’m curious to see how those play out later on down the line.

If you’re going to write off Diablo Immortal because it’s a mobile game and you’re waiting for Diablo IV, I get it. I think you should do a few Countess runs first, but I understand that we all want a new “core” Diablo experience. But as someone who wasn’t interested in the slightest upon my first look, I’m inevitably going to tear up a whole lot of demonic forces when Diablo Immortal launches.