Designing for Collaborative Play in Star Crossed, Available Now on Xbox One

Star Crossed​ is a two player cooperative action arcade game with a magical girl aesthetic, available now on Xbox One! If you’re a fan of multiplayer games, we hope you’ll check it out!

Now more than ever, human connection through games is so important. Multiplayer games give us a way to bring family members, roommates, and partners together on the couch.

When we initially prototyped our core mechanic for Star Crossed​​, it was clear we were making an intimate two-player experience. The gameplay is similar to a classic arcade shooter, but instead of shooting projectiles independently the pair of characters has one magical star traveling back and forth between them. This means that both players have control of the star at all times through their positioning in relation to one another. It’s necessary to work together to aim the star into your enemies. Starboosting, a timing based mechanic that powers up the star, adds a timing element that we’ve been told feels like “rhythmic space tennis” (which sounds very cool).

Star Crossed​ features a cast of 5 characters, which are paired up for gameplay. In Story Mode, dialogues and scenes change depending on which characters are selected. Players can experience the narrative through different lenses to learn more about the characters and their relationships. There are 10 possible combinations!

As we developed the visual identity of Star Crossed​​, the magical girl aesthetic was a natural fit. Classic magical girl media, like “Sailor Moon” or “Tokyo Mew Mew,” centers around themes of teamwork and collaboration. In these stories, a young cast of girls from different backgrounds come together to save the day. They must overcome their differences and learn how to work together. As a designer I find that multiplayer games incorporate a lot of these same themes, as gameplay becomes a negotiation between players and you have to adjust to each other’s play styles.

Players need to be on the same page during gameplay, deciding which enemies should be targeted first, when to use a big ultimate, and who’s ultimate is best for the current situation. Fluid movement around the screen is important as you dodge around the space with your partner, like you’re dancing together amidst the chaos of bullet hell inspired gameplay.

The boss fights in Star Crossed​ were designed specifically to disrupt this movement, which is so vital to successful gameplay. Their move sets chase and target, physically limit play space, and force players to adjust how they navigate the screen. As an example, The Witch (in the image below) uses lasers to divide the play space into sections and separate the players.

Ultimately our goal was to create a game which invites players to work cooperatively, designing all elements (gameplay, visuals, theming, etc.) around a positive two player experience. Star​    Crossed​ is easy to pick up but difficult to master and features both an Arcade Mode (with online leaderboards for all you high score chasers out there) as well as a Story Mode which focuses more on the characters and their journey. Our cast was created with intentional inclusivity, so all kinds of players can see themselves represented and take on the role of a hero!

Check out Star Crossed​ today and invite a friend to join you on the couch and grab a controller. The Contigo Games team put our hearts into this game, and we hope it will give you entertainment, joy, and space to spend time with your loved ones. Thank you for reading! 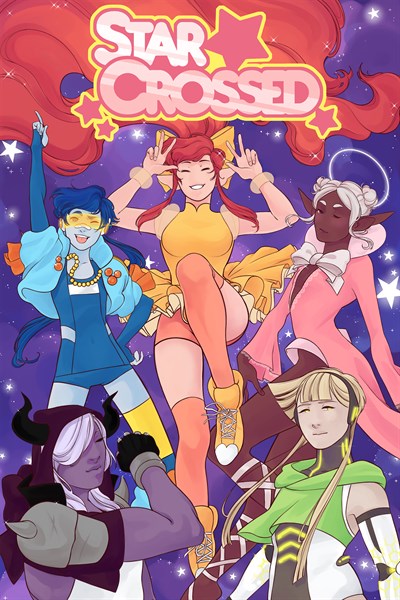 ☆☆☆☆☆
★★★★★
$9.99
Get it now
StarCrossed is an action arcade game with a magical girl aesthetic and a cooperative twist! Join our cast of 5 space-faring heroes as they travel across the stars, working together to strengthen their bond and defeat a looming evil that threatens the Nova galaxy! It’s time to team up, get sparkly, and take out the bad guys!

Related:
Kingdom Two Crowns: Dead Lands Brings Bloodstained Characters to the Game
Even Paper Can be Dangerous in Book of Demons, Available Now on Xbox One
Build Your First Level in Levelhead with These Tips and Tricks

Changes to the Xbox Insider Hub