As a kid on his way home from school in the mid-80s, few things got me more excited than the prospect of rushing through the door, flinging down my bag, and catching the latest episode of Transformers. It was a ritual in my house, and the characters, music, and images of that cartoon are embedded in my memory.

Mine wasn’t the only generation that has enjoyed these strange robot creations. Over the years, the Transformers have regularly reinvented themselves with new iterations across comics, movies, cartoons, games, toys, novels, and more, all while still celebrating what has come before.

Today marks the 35th anniversary of when the cartoon first aired, with the first episode of the three-part “More Than Meets The Eye” opening arc. To celebrate, here’s 35 ways you can mark the occasion, celebrating the surprisingly enduring franchise that continues to fascinate both kids and adults in 2019.

Head to lunch with your co-workers and shout “Transform and roll out!” as loud as you can as you leave the office. They’ll appreciate your enthusiasm!

Listen to and watch the original theme song. Centuries from now, anthropologists may very well recall this piece of music as one of the high points of 20th century culture.

Watch the early minutes of the recent Bumblebee movie, and bask in the dream of a live-action Transformers movie that doesn’t have any of those pesky humans in it.

Read through any one of the hundreds of available comics of the recently concluded IDW Transformers comics, which ran from 2005 to 2018. Taken as a whole, this is certainly the most expansive fictional framework of characters and storylines in the history of the franchise, tracking characters over many years and conflicts, and taking big risks with the ways characters are presented (Megatron as an Autobot?!). The stories also explored complex territory around gender roles and romance among the Transformers, delved into heady sci-fi concepts, and introduced some characters that have since become centerpieces of the fiction, like Windblade and Drift. 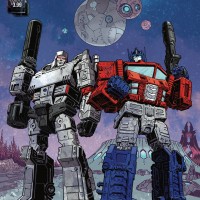 If that line of IDW comics sounds too involved to dip your toe into, instead check out the newly rebooted IDW comics, which have only been releasing for a few months. This fresh take on the storyline is a clean break from the previous universe of comics storytelling, and focuses on familiar characters like Megatron and Optimus Prime in the lead-up to the big war on Cybertron.

Wear purple or red to show your Decepticon or Autobot allegiance. Insist that people acknowledge you by your faction, especially in public. They’ll appreciate your devotion to the cause.

Download and play Transformers: Forged To Fight. The mobile game is available on both the Apple App store and on Google Play, and features an action/fighting dynamic as characters from across the Transformers mythology do battle and upgrade. The fun here is in seeing big fights play out between some of your favorite characters. Just watch out for those microtransactions!

Try out the excellent tabletop Transformers Trading Card game. In addition to some gorgeous card art, the game features a smartly designed dueling mechanic. Character cards change from vehicle to robot when you flip them over. The game already has several expansions to explore, and the game is still actively growing. 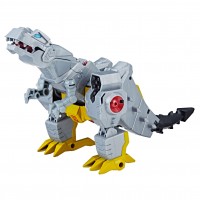 Check out the latest cartoon; Cyberverse reimagines the heroes and villains yet again with a bright aesthetic and kid-friendly storylines. While you’re at it, introduce a kid in your family to the toys by giving him a figure. The connected Cyberverse line features familiar character designs but with mostly easy transformations.

Serve drinks to your friends and ask them whether they’d like it “on the energon” instead of rocks/ice. Enjoy their quizzical expressions.

Check out the stellar The Toys That Made Us documentary series, available on Netflix, and watch the second episode of the second season, which is wholly focused on the history (especially the origin) of the Transformers toys.

Figure out the most cringe-worthy moment of the Michael Bay-directed Transformers live-action films. Is it Bumblebee peeing on a human? Is it Devastator’s wrecking-ball testicles? Something else? Discuss with your friends. 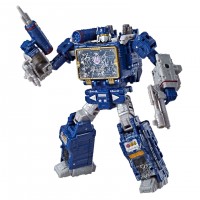 Start your collection of the recent Transformers: War For Cybertron line of toys, easily one of the most appealing lines for collectors to be released in many years. The new figures are meant to evoke the Transformers as they appeared during their battles on their home planet before departing and coming to Earth. Most of the toys recall the original G1 designs, but with battle-damaged paint jobs that suggest long years of conflict. The line also features a weapon gimmick, letting you plug in any number of guns and other elements of their arsenals to kit out your heroes and villains.

Visit one of the thoughtfully curated Transformers fan sites out there, like TFormers, Seibertron, TFW2005, or any of a dozen others. These enthusiasts track the latest happenings in the hobby of following and collecting Transformers, and are a great way to connect with other fans. 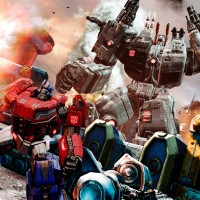 Play the excellent Transformers action games created by High Moon Studios, War For Cybertron (2010) and Fall of Cybertron (2012). While the gameplay and visuals may feel a bit dated after this many years, the games featured exciting storylines, a bunch of characters to play, and smart mixes of vehicle and robot play.

Watch an episode of Beast Wars from the mid-90s. This darker take on the series focused on Transformers that could turn into mostly real Earth animals. And while the CG graphics are quite dated, they represented an impressive approach to animation in the day.

Track down and start collecting BotBots. This relatively recent new collectible line features mini Transformers that turn into everyday objects that you’d find in a mall. While decidedly targeted at the younger set, the wide variety of designs and paint jobs can easily scratch that collector’s itch. 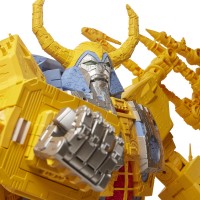 Consider backing the positively massive Transformers: Unicron figure. The largest official Transformers ever made, this figure is part of the HasLab project, which features fan-targeted creations that only go into production if fully funded ahead of time. How much are you being asked to fund this big guy? $574.99! That’s pretty wild, but even if you don’t plan to back it, it’s worth perusing the info Hasbro has put together about how the giant figure was designed.

Watch The Transformers: The Movie, first released back in 1986. Backed by a melodramatic 80s rock album soundtrack and some impressive voice talent (Orson Welles and Leonard Nimoy? Seriously?) the movie is a ton of fun. At the time, the movie acted as an easy way to clear out some old characters and introduce some new ones for the sake of the ongoing toy line, but in practice, it meant the movie included the deaths of tons of fan-favorite characters, including (gasp!) Optimus Prime.

Don’t have time for the whole movie? Get motivated by listening to Stan Bush’s iconic anthem from the animated movie. “The Touch” will have you ready to take down a world-eating super-robot (or at least get through the work day).

Slap the Grimlock. It’s a thing. Look it up. 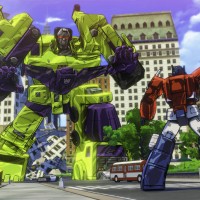 Pick up and play a copy of Transformers: Devastation, which is available on modern consoles like PlayStation 4 and Xbox One. Developed by the action game masters at PlatinumGames, the cel-shaded visuals recall the 1980s cartoon, but the action is fast, the levels are challenging, and there are a ton of characters to master.

Snag the newest big Titan-sized figure available for your toy collection. The new iteration of Omega Supreme is just now going up for sale, so if you need a big centerpiece for your collection, you could do a lot worse than the giant rocket base guardian.

Play Transformers: Earth Wars for a dose of strategy with your Transformers gaming. You play the Autobots or Decepticons, build bases and defeat your enemies. The mobile game is available on both the App Store and Google Play.

Go down the rabbit hole of TFWiki.net. This massive repository of information about the Transformers explores everything from comic storylines to toy collections, and everything in between. Want to try to make sense of the many competing Transformers timelines? Well, it’s impossible, but here’s a good place to start your attempt!

Watch Transformers: Prime, one of the deepest and most narrative-focused of the many cartoons that have come out from the franchise. Airing from 2010 to 2013, the storyline went in surprising directions, involved truly dynamic characters that changed over the course of the show, and featured some beautiful animated visuals that did a good job melding the original G1 aesthetics with the live-action Transformers appearances that were popular at the time.

Dig out the original Marvel Comics run from the 1980s, if you can find them. Darker than the cartoon that ran concurrently, the comic line featured a complex plot and dozens of characters, and did much to solidify fan enthusiasm for the franchise. 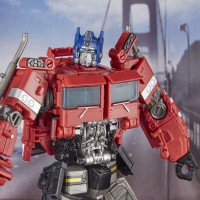 Snag your favorite character in the Studio Series line. Love or hate the live-action movies, there’s no doubt that the designers crafted some crazy robot designs over the course of those movie releases. For screen-authentic presentations of the characters, it’s hard to beat the recent Studio Series line of toys, which boast great detail, sculpting, and transformations that recall the appearances in the movies.

Dive into the rich treasure trove of videos called Transformers: The Basics, from Chris McFeely. These in-depth videos feature rundowns of characters and other concepts from across the fiction, breaking down the often impenetrable enmeshment of different timelines and universes with clear narrations and explanations.

Enjoy the excellent Transformers: Animated (2007-2009) cartoon with your kid. All 42 episodes (across the three seasons) are available on DVD, and the whole thing is well worth a watch. While the exaggerated character designs might initially turn off old-school enthusiasts, the smart storylines, well-drawn action, and tons of callbacks to other generations of characters make this my personal pick for appealing to both adult and kid viewers watching together.

Start making the Transformers transforming sound everytime you change clothes. Tsche-chu-chu-che-tsche! Especially effective and enjoyable when done at the gym in the locker room, or while getting ready for bed with your spouse nearby. 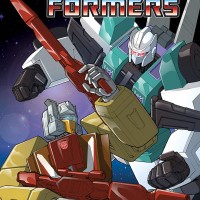 Did you always find yourself wishing that the original Transformers cartoon would have just continued on for a few more seasons? While I can’t necessarily recommend its overall quality, if all you want is an extension of the original cartoon, you should watch Transformers: The Headmasters. The Japanese cartoon effectively continued on the heels of the end of the American cartoon (with the exception of the last few American episodes, which are reimagined in a new way), and while you’ll likely need to watch with subtitles on, you can now track down the series here in the United States without too much trouble.

Investigate the back-catalog of Peter Cullen, the celebrated voice actor who is best known for voicing Optimus Prime. Notably, Cullen has frequently cited that the original feel and voice for Optimus Prime was inspired by his brother, a decorated Vietnam vet who encouraged him to present the robot/truck hero as a real leader, who was strong but compassionate, and soft-spoken when possible rather than yelling and screaming like many Hollywood heroes. The resulting noble and charismatic character is a big part of why so many remain fans of Transformers to this day.

Get an Autobot or Decepticon insignia tattoo. Don’t think about it! Just go for it! Bonus points if the tattoo location hurts your future job prospects.

Dig out your favorite Transformers toy from when you were a kid, and marvel at how it’s still fun to transform them.

Hearthstone’s Forged In The Barrens Arrives Tomorrow. Here’s What To Expect

The creator of ‘Can You Pet the Dog?’ has launched ‘Is Something Behind the Waterfall?’